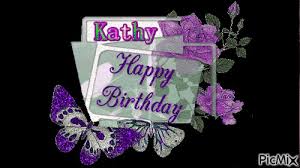 I went to Kathy's last weekend to celebrate her birthday. I had a wonderful time.

She came to get me on Friday evening after work, surprising me by taking the 401 to get here. She's a country girl at heart, and freeways, especially urban ones, intimidate her a little. But she made it, and we were soon heading back to Woodstock via the usual country roads. More scenic, less stressful. Even as a passenger, I prefer them.

We stopped to get some groceries and to pick up her present, which I had ordered online from Dublin, Ireland, ten days prior. It's a map of the stars for the night we first met, as seen from where we met. Somehow, I managed to avoid telling her what it was before she saw the package shape and figured it out for herself. (I'm not very good with secrets, especially when it comes to gifts.)

I'm not very good with gifts, actually, at least at first. My first gift to Eva, as I have noted here shamefully a few times, was a hideous "dog clock" thing that -- well the sentiment was there, it was supposed to symbolize luck and love, and I was and am lucky to have found her love. But the thing was fugly.

True to custom, I bought Kathy a pair of gag socks for Christmas that had a funny, semi-obscene phrase on them I could just picture her saying out load. Problem was I didn't bother to try to picture her wearing them, because if I had I might have realized those weren't the kind of things she would ever wear.  Le sigh.

I resolved to do better for her birthday.

And did. She loved it.

Groceries stowed, we watched Stand By Me, a favourite for both of us. We ended up retiring early, at least by Kathy-standards, soon after she'd gone to fetch her daughter, Jade, from work. Jade doesn't work very far away, but Woodstock is the most crime-ridden city in Southern Ontario, and all of us feel better with Jade safe.

Saturday was Kathy's actual birthday, and she awoke to the modern traditional Facebook love, including a poem from me. It doesn't usually take me forty minutes to craft eight measly lines, but what can I say? I'm not the morning person I once was. And without my computer, I'm reduced to tapping away on my phone. Not a poet's best situation, but I made the best of it.

Downstairs I go, while Kathy is performing her morning ablutions. Morning routine imported from home to here: Keurig coffee procured, I'm listening first to classical music, and then to 680 News. Only here, I'm using a Google Home to do those latter things. I've been playing around with this thing, and I like it. A lot. It's not, strictly speaking, a necessary gadget, but it's kind of a nifty thing to have. "Hey Google, play FM96"..."Okay, streaming FM96 on TuneIn"...and there's your voice-activated radio. It'll also do timers, alarms, voice-activate all aspects of your TV if that's hooked up...and you get Google at your beck and call.

Jade and I shared a couple of Google giggles. "Okay, Google," I said, mock-seriously. "Who is the fairest of them all?" A pregnant pause, and then a reply: "You might have confused me with somebody else. My engineers haven't installed a fairy tale module yet". Undaunted, I tried, "Okay, Google, what's the meaning of life?" and it came back with "I think it's somewhere between 41 and 43".  I cracked up. I couldn't help it.

Off to the Woodstock farmer's market, the three of us. It's a far cry from the farmer's market down the road from me--single, fairly small building, no outside vendors at this time of year, and we hit it an hour before closing, so it was fairly picked over. But we still had a good time. And Kathy must love me....very early on, she told me nobody but nobody ever shared her cheese curds. Well, meet nobody. (smile).

Woodstock has just a hair over forty thousand people, so it never fails to amaze me how Kathy is always stumbling over people she knows, much the way my father does in Parry Sound (population about six thousand). I met a former dance classmate of Jade's last night at No Frills and here I am meeting a cousin of Kathy's.

We pick up some amazing thin crust pizzas from the amusingly named Uncle Dad's, and then Jade's going cake shopping for her mom. Nothing at Foodland, but a nice one at Dee Light's Bakery (this place is out of a fairy tale; I just want to eat everything up in here, Cookie Monster style.

Jade adds her own personal touches: 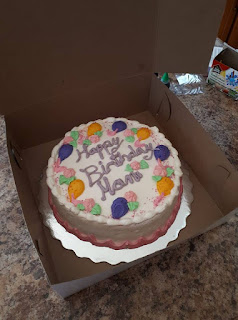 Tasting it will wait. First, before Jade goes to work again, we watch Inside Out, a movie I partially credit with helping me out of a life-threatening depression back in 2015. Neither Kathy nor Jade had seen it; we all enjoyed it. And then....

I had originally made reservations at the Finkle Street Tap and Grill, which is anything but your standard tap and grill. Kathy reviewed the menu Saturday afternoon, blanched at the prices (pshaw)...and then told me there were MAYBE two things on that menu she'd consider eating.

Well. That changed things. I cancelled those reservations and hurriedly made some here instead.

And am I EVER glad I did.

My sole beef with the Charles Dickens is the noise level. It is an authentic English pub, right down to the fact that half the population of England seems to be in here. But the food, ah, god, the food. We shared a scrumptious cheesy garlic shrimp appetizer, and seeking something seriously British, I went with a steak and stout pie that ended up being easily in the top ten things I've ever put in my mouth.

Back 'home' to Jade and her cake and then another movie: The Greatest Showman.

This movie I am of decidedly mixed minds on. It purports to tell the story of P.T. Barnum, and butchers that story almost beyond any kind of recognition, needlessly Hollywoodizing a fascinating tale. But the music is poppy in the best way, full of energy and joy and Hugh Jackman, who has arguably the best singing voice of any current male actor. Both Jade and I have downloaded the soundtrack; I'm listening to it now.


Brought me to tears.


Sunday was a lazy morning punctuated with a few chores. I was starting to get more than a little nervous: I was supposed to be meeting Kathy's parents.  You can perhaps imagine. None of my parental figures have been exactly welcoming, and so I was bracketed and braced for a rough ride. I should note: Eva, with whom I had been in intermittent touch all weekend, texted me "be yourself love, you will do fine"...just as I was finding out Kathy's folks had cancelled. Regret and relief mingled uneasily.

One more movie, again a repeat for me, but one Eva had zero interest in seeing and one I strongly (and correctly) suspected Kathy would love: Room, from the book by Emma Donoghue. Even more enjoyable for me the second time.


Dinner, and then a Greyhound home.

And finally, importantly, I must thank you, Eva, love. You were always and will always be a treasure unto yourself; I love you dearly; and just one of the MYRIAD ways in which you are a treasure is that you have opened the door to other rooms with other treasures. Like Kathy. Like Jade.  I love you, love. Always have, always will.
on March 28, 2018