How To Save Your Heart 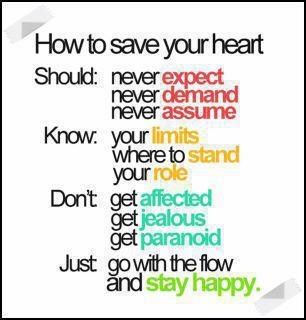 Like many people my age, I live two lives that intersect: virtual and real.

Many times I have thought of disconnecting, or at least radically limiting, my virtual life. I know many people, among them my wife and many of my closest friends, who spend very little time on Facebook, certainly don't post much, and who ignore Reddit entirely. Me? I post six or seven items a day most days, sometimes more. These blogs go up on Facebook and are available for dissection and discussion...there's nothing I like more than engaging one of my readers. I talk to at least four or five people each day on Messenger. And I'm always putting things up on my timeline that interest me and that I hope interest others. I find the act of sharing rewarding.

We all curate our Facebook timelines, myself included. Because I value authenticity above all else, I strive to be as authentic as possible on mine, which means I don't shy away from posting my flaws.

Like a growing number of people of all ages,  I practice a form of consensual, or ethical, non-monogamy. And I'm not telling anyone who has been here more than twice anything they didn't know. My polyamory is an important part of who I am; I find the act of sharing rewarding.

And so, on Facebook, I will share poly-themed articles and posters fairly frequently, making sure they are surrounded by 'normal' things that 'normal people' share.  Here's a pun, here's an article on social justice, here's one on the environment or spirituality or the latest Trumpian outrage, here's another pun, oh, look at this article about polyamory and children! Lather, rinse, repeat, with maybe a few more puns next time.

As my poly journey moves forward, I encounter bumps in the road. These bumps, to a monogamous person, are proof positive that polyamory is unnatural, wrong, and doomed, because all your monogamous relationships are of course smooth sailing all the way. Ahem.  As I have said from the day I first opened, the success or failure of a relationship is determined not by whether it's open or closed, but by the people in it.

The thing about polyamory is that it's scary. It's scary because it throws every insecurity in yourself and in your relationships into sharp relief. Even if you don't think you have a jealous bone in your body...well, if you do, polyamory will find it and expose it. If your relationship has a sore spot, its rubbing up against other relationships -- called "friction", if I recall my basic physics -- will chafe it, redden it, make it hurt. And so you address the jealousy or the sore spot...together...and grow.

To make things even more challenging, I aspire to a form of polyamory called 'relationship anarchy.' I hate the name, because 'anarchy' implies chaos and disorder and eating the weak. RA is none of that....it has NOTHING to do with political anarchy.  It's only 'anarchy' in the sense that it does not abide by the social accepted rules and especially boundaries of traditional relationships....it does not in any way suggest there are none, only that those rules and boundaries are established by the people in the relationship.  To wit: 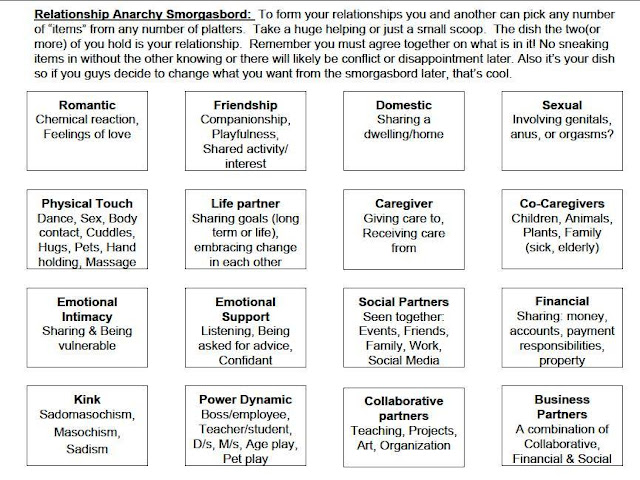 that paragraph above the chart is CRITICAL

Why must you make everything so damned complicated, Ken? Why can't you just follow the standard paradigms?

The easiest answer to that is: I don't know how. I was a relationship anarchist before I had real relationships. Look at that 'friendship' square. That is not even CLOSE to an accurate representation of what my friends are to me. All of my friendships incorporate the "emotional intimacy" square. Some are "social partners", while some I have never met and am unlikely to ever meet. I have a friend, Mark, with whom I share a home--there's the 'domestic' square.  Being demisexual,  my 'physical touch' and 'sexual' squares don't align the traditional way.  In short: I'm a complicated person, and RA acknowledges and facilitates that complexity.

It also is the only relationship paradigm I've yet seen that openly acknowledges a fundamental truth: relationships change. Not always in predictable ways, either.

My only close friend between the ages of 11 and 14 was named Tim. His parents, Bob and Sue, had a marriage that puzzled me as a kid. They did not do any of the things I associated with married couples. There was no physical affection shown between Bob and Sue, no 'dates', no romance of any kind.  I confirmed with Tim that this wasn't prurience or propriety...his parents had been that way for as long as he could recall. Obviously not forever, because Tim and his sister were produced in the usual way, but for a long time and for as long as I knew them, Bob and Sue were business partners who happened to be housemates as well as parents.

Some people would say such a marriage was incomplete at best and invalid at worst. Obviously not...it worked for Tim's parents and it works for many others. I doubt they were early adopters of polyamory--they were extremely conservative--but you could still call them, in a very real sense, relationship anarchists (if such a term had existed in 1984).

That stuck with me. I've since seen a lot of relationships that don't fit the 'traditional' parameters in one or more ways. Some of them were happy and stable, others weren't, and it gradually dawned on me that relationships are as complicated as the people in them.

Polyamory, and relationship anarchy in particular, demands a high and consistent level of open and honest communication. And as well as I do communicate, I can get much better. That's where that first poster comes in.

I had the first two licked long ago. Long, long ago. I wrote a blog entry twelve years back about the perils of expectations in relationships, and my convictions regarding same were ancient then.

Demanding is usually a way of enforcing an expectation, and so that was never an issue, either.

My assumptions are almost always wrong, and they usually boil down to "If A happened, it must mean B, and C is the next step". That's hysterical, because the whole point of relationship anarchy is to pick and choose whatever events/customs and meanings signify, not for society, but for the people in the relationship. And 'steps' can be thrown out the window entirely if you want them to be.

Know your LIMITS
Know WHERE TO STAND
Know YOUR ROLE

These things need to be clearly communicated by all parties in a relationship. If you don't know and express your limits, you're likely to be taken advantage of in one way or another. If you don't stand up, your feelings will not be known. And if you don't know your role, it can lead to all kinds of unfounded assumptions about what that role is and what it does and doesn't entail. And according to the principles of polyamory AND RA, different relationships can occupy the same squares on the smorgasbord. THAT's important to remember.

These things come to me most often when I am feeling unsure of my role.

Just like monogamy, polyamory requires trust. In polyamory, it's perfectly fine for your partner to have other partners. It requires an act of trust that he won't leave you for one of them just because, say, that other partner is better in bed. The corollary of this is intensely rewarding: if she can see others and still chooses to see you, it pretty much has to be because she loves you....

RA can scramble things-- making "dishes", above, that might not be traditional cooking, but are delicious-- nd so it's important (at least for me) to acknowledge and respect the other relationships...while concentrating on ours. Getting alarmed at where I perceive one relationship to "be" is INCREDIBLY counterproductive.

Instead, with the help of honest, loving communication with my partners, I should

just GO WITH THE FLOW
and
BE HAPPY.

Adele said...
This comment has been removed by a blog administrator.
7:06 pm

Madison Britton said...
This comment has been removed by a blog administrator.
8:32 am

All thanks to this great man called Dr Agbazara the great spell caster that bring back the joy in me by helping me to bring back my lover who break up with me Four months ago but now with me with the help of Dr Agbazara the great love spell caster. All thanks goes to him you can also contact him for help if you need him in times of troubles via: ( agbazara@gmail.com ) you can also WhatsApp: ( +2348104102662 )