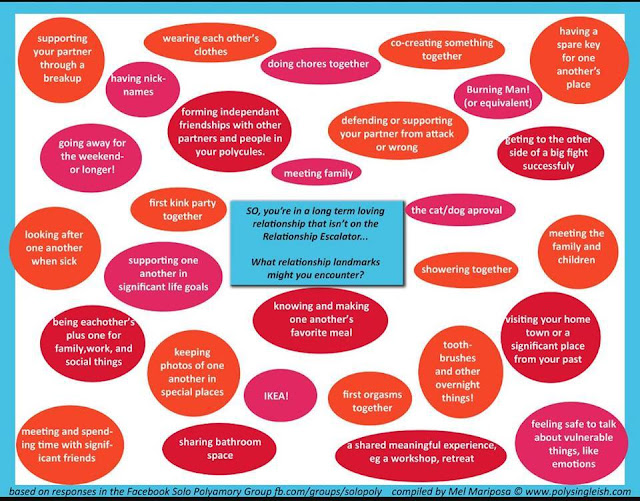 Sample relationship milestones, with a poly bent. Many of these work for any relationship at all, some just for polyamorous ones (forming independent friendships with metamours is something the monogamous mind is apt to kack at, and so is "helping your partner through a breakup")...and some of them for only a subset of poly relationships...it sometimes seems hard to believe, but not all of us go to "kink parties", for instance. And you'll never get me within a hundred miles of the Burning Man festival. I've read up on that. It's one of those things I love the idea of, but I know I'd loathe the reality.
____________________________

The blessing and curse of polyamorous relationships is freedom.

It's a blessing for the obvious reason: in polyamory, you (usually) have the freedom to follow relationships wherever they lead, regardless of the existence of other relationships. This can grant you the experience of abundant love, which is, let me tell you, heady stuff indeed.

The "curse"? Your partner(s) has/have the same freedom.

That isn't really a curse, of course. At all. It's the whole point of polyamory, and it's what generally separates polyAMORY from polyGAMY. (Ask yourself how many 'harem' women get to have other (male) partners of their own should they choose.)

In Neale Donald Walsch's CONVERSATIONS WITH GOD series, the following synonyms are given for 'God':


On some level, I think these words are synonyms for each other as well: The universe is life is joy is love is freedom.

But freedom can also feel like a curse, sometimes.

Monogamy has a very extensive set of unwritten rules. There are lots and lots of things you generally only do with your partner, for instance, on pain of being branded a cheater. But it's not just rules...there are generally accepted meanings behind milestones as well. You don't just bring any first date to meet your mom; meeting your mom generally means the relationship is either serious or about to get that way. You probably don't have to ask "what does this mean?" before you meet the mom. You know.  Getting a key to your partner's place? Likewise, that's a meaningful milestone suggesting there's a future and you're part of it.

Polyamory has many of the same milestones, of course, and even many of the same meanings. You're probably not going to hand to spare keys to your home to everybody you date; doing so speaks to a level of, for lack of a better word, commitment which may not exist in other partnerships you have.

But not all the meanings are the same, and there is no Book Of Poly Meaning you can consult. There are no unwritten rules in polyamory. There are guidelines that make your poly life a hell of a lot less dramatic, but when it comes to rules, folks, you're on your own. And deriving meaning from some of these milestones is a mug's game.

For example, you may NEVER get to meet your partner's parents. Not everyone is out to their families, and some of those who are face a solid implacable wall of no when it comes to getting acknowledgement of 'extraneous' partners and their importance. This is regrettable, galling, sometimes infuriating, even...but you can't make people accept things. Even time sometimes doesn't work. So it's entirely possible you're extremely important to your partner, but haven't and won't meet their parents. For similar reasons, the digital acknowledgement people put so much store by -- the 'relationship status' on Facebook -- well, as of right now Facebook recognizes open relationships, but doesn't have any easy way to state you're in a relationship with someone AND someone else. So again, that particular milestone isn't likely to happen in a polyamorous relationship. Even worse, for reasons related to those for not meeting the parental units, it's not just possible but commonplace for someone to have a public "face" relationship and no mention of others. That can sting the others.

And this drives to the heart of something I have talked about before in polyamorous relationships: comparison. It's comparison that really triggers most jealousy, and the fresh hell of it is, most of the time what you're comparing isn't even applicable.

I will explain that.

I've said before that comparison can be lethal to self-esteem, and it can. But it's inevitable. Let's not kid ourselves here: if one of your partners is short and the other is tall, you're going to notice the difference. If one partner is kinky and the other is vanilla, you're going to notice the difference. And so on and so on and so on: PEOPLE ARE DIFFERENT. And isn't that a good thing? Be a pretty boring world if we were all the same.

The kind of comparison that can really wound is implied when superlatives are dropped. "She's the best lover I've ever had" is probably not something you want to disclose to your other lovers, who will then be unable to help feeling like chopped liver (and if you've ever made love to a plate of chopped liver, you know just how awful a lover a plate of chopped liver is!) So don't say that. Don't even hint at it.

Instead, relish the comparison and value each person for who they are. "I love my tall partner because I feel so enveloped with him! I love my short partner because I don't get a kink in my neck trying to kiss him!" Silly, maybe, but there you go. And if one of your partners IS the best lover you've ever had, it's okay...provided you do it gently...to encourage the others to improve. But again and again and again...IT'S NOT A COMPETITION. In bed or anywhere else.  Without the superlatives, if you're comparing properly, what you're saying is the very essence of polyamory: I love you for who you are, and I love them for who they are.

There is another kind of comparison, though, more insidious, and potentially more damaging still. That's where you compare not people, but relationships.

No, it doesn't mean any of those things. Not automatically, for sure, and probably not at all.

Sex is far from the only thing that draws this out; in fact, it's one of the things that usually doesn't.  Maybe she's gone on a trip with him but not with you; maybe they've slept together (I always have to explain that when I say 'slept' together, I mean JUST that); yes, maybe he's met friends and family you haven't yet. THERE ARE MANY REASONS WHY ONE RELATIONSHIP MIGHT BE PERCEIVED TO BE 'AHEAD' OF ANOTHER...and there are even more reasons why that perception might be 100% dead wrong.

If you're concerned when your partner passes what you think is a milestone with another partner, by all means, ask about it. Remember though,  that insecurity is not just unattractive but a self-fulfilling prophecy; a little of it is fine and to be expected, but constant reassurance is not a burden you want to put on anyone (or deal with yourself).  A more productive course of action is to concentrate on your relationship with your partner, not their relationships with other partners. Make that relationship the best you can, and it will take care of itself.