What You Were Never Taught.... 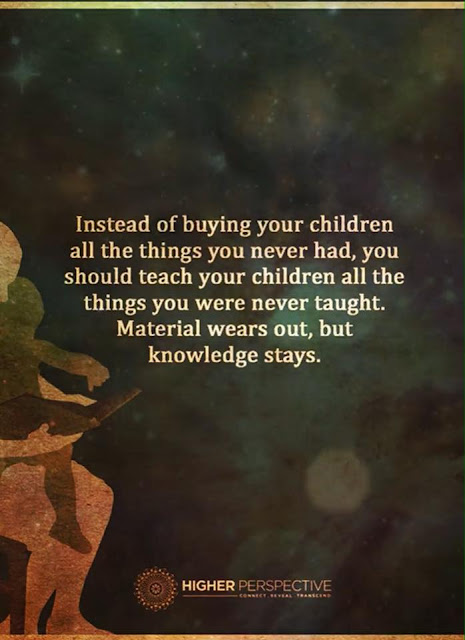 Lovely sentiment at first viewing. But then (as usual), I got thinking about it.

How do we teach what we were not taught ourselves?

That requires a level of self- and other-awareness that many, perhaps most people, lack.

Does anybody remember this? 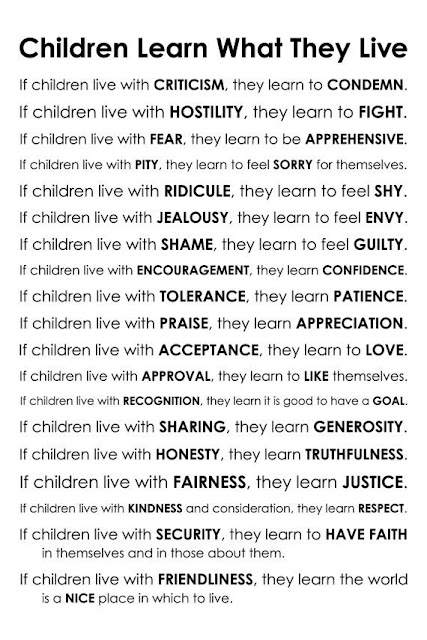 This poster positively LITTERED my 1970s/80s childhood. I saw it everywhere, even more often than I saw "Desiderata". "Children Live What They Learn" adorned our fridge for a long time;  it was in at least two books of poetry I owned; my therapist had it on his wall.

It's not always true.

Some children, perhaps the more introverted and reflective ones, come out of childhood armed with two lists: THINGS MY PARENTS DID RIGHT and THINGS MY PARENTS DID WRONG. I was definitely one of the reflective ones, and I did indeed have those two lists. I even wrote them down. The physical copies are long lost, but I've continually revised and expanded both lists. Sometimes things switch sides.

Mom did a hell of a lot right -- all the more so when you consider what SHE had to work with. She came out of the kind of childhood that spawns all manner of mental illness. She saw things, and suffered things herself, that were damned close to unspeakable. Nevertheless, she imbued me with a solid sense of self and encouraged me to be whoever and whatever I wanted to be. She used every trick in the book to encourage a love of reading, and it's that love I credit for my empathy. Mom also encouraged music--she paid for piano lessons when money was hard to come by.

She loved me as unconditionally as she could manage. In doing so, she gave me the greatest gift imaginable.

Dad was not a full-time parent from my fifth year on, but I'd still say he did a lot right. His love was not demonstrative, but it was demonstrably, unmistakably there. His house used to be a place where I could relax, unwind, and let shackled parts of myself (more on that in a few minutes)  out without fear of censure. And I can trace my embracing of technology directly to my father. He bought a TRS-80 Color Computer with an ungodly 16K of memory in 1982, and I spent untold hours writing (and, sigh, debugging) programs in BASIC; I later taught myself Korn shell. Should have done a lot more with that -- I had a mind for it -- but as with everything else in my life, I lacked the discipline. That, I don't think I can blame on my parents or anyone else. That's something I must own myself.

Both Mom and Dad blessed and cursed me with an overdeveloped sense of consequence. On the whole, I'd say it was a blessing, but there are certainly downsides to it. I am extremely risk-averse, for one thing.

My stepfather modelled practically limitless reserves of patience. He would doubtless be shocked, given how often I tested that patience, at how it is one of my defining characteristics now. He also was the fount of what practicality I do have. Stipulated, that's about a quarter of a mindset, but it's better than it'd be without him. His love, too, was unconditional: I keep coming back to him telling me, when I was about fifteen, that he'd much rather see me get drunk at home, where he could keep an eye on me, if it was something I had a mind to do. (I didn't. Have a mind, I mean.)

What did my parents get wrong? A few things. Unlike most others (for example, my wife), I was not raised with much of a sense of self-reliance. I think this ultimately traces to the three years my mom and I were alone together against the world. She did everything for me in those years--picked out my clothes and sometimes even put them on me. Tied my shoes. Many other things, some of them even more embarrassing to admit (how many eight year olds do you know who don't know how to tie their own shoelaces?) John undid what he could, but he could only undo so much.
It extended to money matters, and here, yes, I do blame them somewhat. I had no idea of the value of a dollar. Absolutely none. Had I been asked how much my parents made, I would have been off by thousands, maybe tens of thousands, of dollars. Mom had total control of my money, and her overriding goal was to save as much of that money for my postsecondary education as humanly possible. (Which isn't to say I wouldn't receive something if I asked for it and could prove a need). But the end result of that was me blowing through ten grand in eight months on absolutely nothing of any importance.

Earlier in my childhood, of course, there was the venomous marriage between Mom and Dad. Unforgivable -- and for me, unforgettable -- things were done on both sides, and it wasn't until much later that I learned how Mom contributed to the wreck, to wit: she was pathologically possessive, insanely jealous. THAT'S something I internalized right early and vowed to myself I would never emulate. To this day, I am stricken with horror shortly after I am stricken with jealousy. This would be a case of a child deciding not to live what he has learned.

There are other cases, some of them collective. For example, seemingly overnight, corporeal punishment -- i.e., spanking -- went from a normal part of raising a child to, in many cases, a felony.  This is, in my view, an unabashedly good thing--we don't strike anyone else when we're angry because we know they'll hit back harder, but since time out of mind it was somehow considered completely kosher to strike a defenceless child. But what I find fascinating is how, within a single generation, almost all of us decided NOT to live what we had learned.

All of us have a toolbox. Very few of us have all the tools in it, and sometimes it's impossible to know what you don't have. If you've never experienced unconditional love, for instance, it actually feels ersatz when it does come along. I've actually had people question my depth of feeling for them because I didn't (don't) care what they wear, how angry they might get, any number of other things. I don't, though. I care about them. Not how they appear, not what their current mood is. Them.

There are many things I didn't learn until later in life, and a much greater number of things I have yet to learn. I've often paraphrased Richard Bach -- "you teach what you most need to learn" -- but that's only even possible if you've at least started to learn whatever it is you're teaching. When it comes to teaching children, you have to take into consideration not only what you have and haven't learned, but what they're ready to learn and how they might best learn it.

I wish I'd had kids. I've gone back and forth on that since CAS rejected us for adoption, but I think I've settled on wishing we had children. I would have loved to give a child the sense of peace I strive every day to maintain in myself. I would have done the same with children that I endeavour to do with everyone: allow them to evolve, at their own pace and time, into the next greatest version of the grandest vision they ever had about who they are.

We had that hanging in our house when I was a child and it baffled me. Because my mother was jealous, hostile, intolerant and sometimes violent. I yearned for the end part of the poster, used to read those qualities and wish for peace and love and kindness.

I went to live with my grandmother (my mom's mom) when I was 17 and I lived with her for 5 years. She was everything mom was not and nothing that mom was. I used to wonder sometimes how my mother came from her and I came from my mother. When mom was being vile to both of us, grandma wondered too.

I was terrified when my daughter was born. I was so afraid of being like my mother.

This past Christmas, the Offspring gave me a guide book for Morocco (a place I have always wanted to see) and told me she had opened a bank account in which she was saving to take me on a trip. I thought I was going to burst with joy that this lovely, talented and interesting human that my baby turned into actually wants to spend time like that with me.

I'm sorry that you and Eva, who I think would be wonderful parents, didn't have children. I'm sorry that there are children out there growing up with parents like my mother. It's so unjust.

thank you, Karen. All these years later, we still wonder, inwardly, what the "real" reason was that we were turned down. We also, in the telling of the tale, feel like people must be wondering just what kind of monsters we are.
I'm glad you rejected vileness, and glad Offspring has embraced qualities you have yourself.