I have been holding off on writing this blog, because this is still a developing situation. But it surpassed 'uncomfortable' a long time ago and is now beyond 'agonizing'.

Parry Sound 33: the 33rd forest fire of the season in Parry Sound District, my second home growing up. Such a prosaic name for a bitch-monster of a fire that started July 18 and according to reports I have read, may not be under control for another month or more.

There have been no deaths or serious injuries as of this writing, Which is about the only good thing I can say. Well, that and the fact my dad, who is a volunteer fire captain in the hamlet of Britt, about 10 km south of the fire, is not directly involved in fighting it.

That last is supremely relieving to me. It was also kind of perplexing.  The fire command centre is in Britt, practically next door to the firehall. But "we're not involved as a(n) f(ire) d(epartment) at all", he texted me.
But I had forgotten something. The Britt and Area Fire Department (BAFD) is not equipped to fight anything on this scale. In fact, they don't fight bush fires at all unless (a) they're accessible (much of the district really isn't) and (b) the fires are threatening property or life. Otherwise, the Ministry of Natural Resources is called in. And with something like this, the call goes far and wide: more than 90 people are engaged here, from various provinces as well as the United States and Mexico. 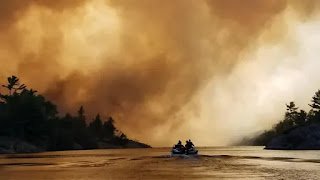 As of today, Parry Sound 33 is about 10,139 hectares in size and still growing. That's 101 square kilometres (about 25,054 acres or 39 square miles). It has jumped the Key River, overtaken the Canadian National railway line from Toronto to Vancouver, and is inching perilously close to the Trans-Canada Highway (Highway 69). That highway may be closed later today. The town of Alban (population 2,000) is under evacuation alert. Already two provincial parks have been evacuated and are aflame: French River and Grundy Lake. My dad helped clear that latter park, a place I have many fond memories of and was hoping to visit again in the next year or two. 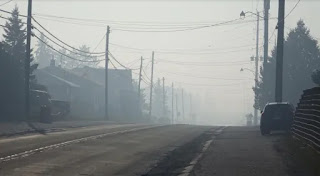 Taken from Alban, yesterday.  At the time,  this was 10 km from the fire. The smoke was reportedly twice as bad this morning.
A friend of my dad's named Tom, who lives down the road and whose blog is linked on my 'Other Ovens' page, informs me that things are not quite as dire as the above might suggest. They haven't got the fire under control and may not have it under control for weeks to come, but they ARE -- so far -- able to manage the perimeter in 'priority areas'. Hopefully that holds. Because the weather forecast for the area is not helpful. The only rain in the forecast comes with lightning. Just what's needed.

There are water bombers scooping up six thousand litres of water at a time from local rivers and lakes and depositing it on the eastern flank of the fire, which is what is threatening the Trans-Canada Highway. Helicopters are ferrying fighters from the base command in Britt to the fire itself, using a helipad my father was instrumental in getting installed.

The fire is alleged to have been sparked at the site of Ontario's largest wind farm, under construction at the Henvey Inlet First Nations reservation...during a total fire ban. Much of my province is tinder-dry and open fires have been banned for better than a month in many locales. (Parry Sound 33 is only a third the size of a fire much further north threatening the town of Elk Lake.) U.S. based Pattern Energy Group LP and its affiliate Pattern Development are likely to face very expensive questions as to why their workers were pressed for seven-day work weeks and blasting 24 hours a day under such conditions. There had reportedly been several small fires on the site in the week preceding; the workers have 20-liter "piss packs"...the nickname ought to tell you how effective they are. 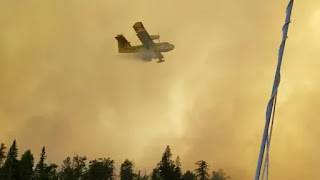 It's scary. It's even more sobering when you realize that there have been 888 recorded forest fires in Ontario this year, up from 243 last year and already well above the ten-year annual average of 517. Moreover, Ontario is far from the only place ravaged by fire right now. In California, fires are creating their own violent weather patterns, including flammagenitus clouds normally associated with volcanoes, and even 'firenados', which have to be the scariest things I can imagine today. Northern Sweden, well inside the Arctic Circle, has experienced a prolonged heat wave with temperatures over 30 degrees C, which is unprecedented in modern history; it, too, is on fire. In Greece, 91 people have died in a massive conflagration. It leaves me pondering one thing: 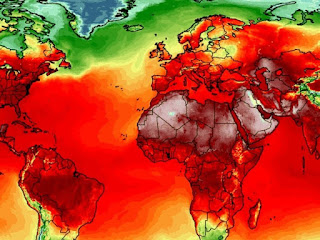 CLIMATE; HOW MUCH DO I HAVE TO CHANGE BEFORE HUMANS NOTICE?