Eva gave Kathy and I a very generous Cineplex gift card for our second anniversary. We decided to use part of it to see Alpha. 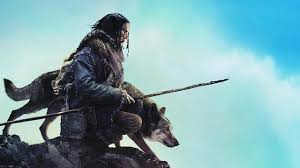 I didn't know much about this one going in, only that it was a boy-and-his-dog story. Frankly, it surprised me a little that Kathy wanted to see this. It's not that she hates dogs, but she's more of a, well, a Kat person.
The appeal to her came clear right at the beginning, with a title card saying "Europe - 20,000 years ago".
Kathy is, hands down, the biggest Clan of the Cave Bear fan there is. At least of the first four books. Eva loves those as well, but not to the same degree: Kathy has entire paragraphs memorized. (Me, I read the first four books, enjoyed each one a little less than its predecessor, and along with many CotCB fans I determined right early that book five was written to pay an extremely pressing dental bill, or something. I didn't bother with book six.)

Alpha starts with a climax: Father Tau and son Keda, along with the rest of the males of the  'clan', on a bison hunt. What seems like a few dozen bison are methodically driven over a cliff, and the last remaining beast shudders to a stop on the edge, and decides it's not his day to die. He gallops back to the line of hunters, spearing Keda, carrying him to the edge, and tossing him over.  It was the first of a few moments where I had to suspend my disbelief, and it happened less than three minutes in, which didn't bode well. But seriously, bison aren't that smart.

Title card: One week earlier. (Did they have weeks 20,000 years ago? Of course they didn't. How hard would it have been to say "seven days"?) I'm nitpicking. We get Keda's backstory as we see he has crafted a decent spear point. Keda, though, isn't too keen on killing things. His mother says "he leads with his heart, not his spear". Dad gives the correct Manly Words to his son, the clan journeys to its hunting ground, and we relive the opening scene to the point where Keda is buffaloed over the edge.

Dad is, of course, devastated. He can see his son on a ledge partway down the cliff face, completely inaccessible and presumed dead. There is nothing he can do but build a cairn and say bi, son.

But Keda is somehow not dead. He comes to injured, screams for Dad for a while before...well, let's just say there are two even larger suspensions of disbelief involved here in how he (a) survives getting off that ledge and how he could possibly (b) alive afterwards. My disbelief at this point has almost snapped, and so has my opinion of this movie.

It gets better. Much, much better.

The boy rests and heals for a while, but is soon attacked by a pack of wolves. He manages to knife one of them as he's escaping into a tree. The rest of the wolves disperse, and Keda is able to gain the trust -- and eventually the love -- of the one remaining.  And then it's "only" a matter of Keda getting home. The hunting grounds are quite some distance along the Sacred Path from the family home, with many predators in the way...and winter's coming.

I am certain Alpha will be nominated for Best Cinematography at next years Oscars, and if it doesn't win, I'd sure love to see the movie that does. My jaw hasn't dropped at scenery that often since the Lord of the Rings trilogy. This is the kind of movie that's utterly wasted on a television screen.


Fair warning, the movie is subtitled. (You didn't expect English 20,000 years ago, did you?) As an avowed language geek, I was all excited thinking that they were speaking Proto-Indo-European (PIE). I should have known better: this movie is set about 12,000 years before that era. Regardless, I was impressed to note that some thought had gone into the creation of the language. Every instance of 'he, his or him' started with an s sound, for instance, every "you" or "your" started with a t. There's not a lot of dialogue, anyway, which makes the effort put in on the language all the more interesting.

I care a lot about believability in a movie. Within the framework of the world in front of me, is this plausible? I walked out of Home Alone, supposedly a comedy classic, because I couldn't swallow parents who would gather all but one of their kids to go on an overseas trip, and not notice the absence of the kid left behind until they were in the air. I sat there for about twenty minutes trying to come up with a reason, any reason, why parents would act that way. "So that there would be a movie" didn't cut it. I left, and I'm still convinced I missed nothing more than an extra-long Three Stooges episode.

Alpha? After those three or four credibility burps in quick succession, the story is gripping, largely believable, and highly emotional. It's worth your time, especially if you're a dog lover.

And thank you, Eva-love...even with the outrageous concession prices, we still have enough to at least get into another movie.