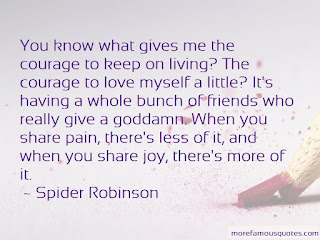 It's only a diary, not a novel or collection of short stories, but you know what they say about beggars and choosers, and I've been begging for a while now. I'll choose any writing from that man over none.

Spider Robinson is what might result if Robert A. Heinlein and Theodore Sturgeon had had a love child that was raised in a hippie commune. Born in New York, he moved to Canada after college and now resides on an island off the coast of British Columbia.
He's a folk musician who has written more than twenty novels. He's won four Hugos and a Nebula; also a Lifetime Achievement award.
His wife, Jeanne Robinson, was a ballet dancer and a Soto Zen Buddhist monk. She died in 2010 of virulent biliary cancer, and she took Spider's muse along with her to the grave. Their daughter, Terri, died of breast cancer two years later. I can't imagine what that does to a man. It's certainly understandable why Spider hasn't published anything in ten years. 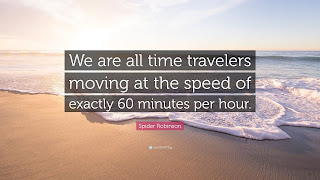 An acerbic ex-colleague of mine named Kevin Cogliano introduced me to the Spider's web back in the very early 1990s and he very quickly became one of my favourite authors. Although his stories involve things like aliens and talking German Shepherds and a leprechaun (actually a clurichaun)...don't let any of that fool you; his works are all about what it means to be human. They're all light and fluffy and bursting with humour, but don't let that fool you either. There are nuggets of deep wisdom scattered throughout, and he's endlessly quotable. 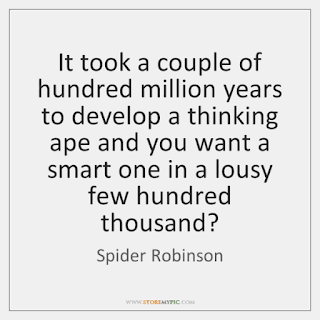 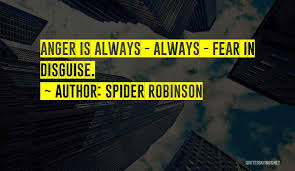 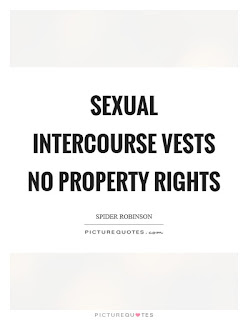 Shortly after I met Eva, she lent me one of her books, the first of the Deathlands series by Laurence James writing as James Axler. They're pure dystopian pulp, and also a lot of fun. I in turn lent her The Callahan Chronicles, which incorporates the first three Callahan's Place novels...and she loved them as much as I did and do.

How to describe Callahan's Place?

It's a bar...but so much more than a bar. Located just off route 25A somewhere in New York State of Imagination, it's run by one Michael Callahan, the proverbial "Mick of Time": he only looks like a burly Irishman, but in reality he's from somewhere far in the future and on the other side of the universe. He and his wife, Lady Sally, are here/now in order to save humanity.

Perhaps explaining the iconic Callahan's ritual will give you a clue as to how that might be done.

You buy a drink, in a glass. You take that glass to somewhere facing the fireplace, and gesture for attention. And you get it; the instant, undivided and full attention of everyone present. You make a toast: to pain, to racism, to whatever your problem is...and you throw the glass in the fireplace. (Mike Callahan gets a bulk rate on glasses.)
Maybe you don't want to talk about it, which is fine: in fact, if anybody asks you a nosy question -- you define what's nosy --  the bouncer, "Fast" Eddie Costigan, will escort that person out, violently if required.
If you do choose to unload, however...your problem will be listened to, pored over, and hopefully solved by people who really, really care.

A lot of people walk into that bar just when they need it most. The patrons can't solve everything...sometimes listening is all that's required, anyway...but they give it their best shot. And then one evening a cyborg wanders in and announces he's the scout for an advanced race that will be here in just a few hours to wipe out humanity and everything else on Earth...

Lady Sally runs a House of impeccable repute in Brooklyn, and she does the same kind of work Mike does, only with her clothes off. Her employees are Artists, highly trained in their Art, and the clients (NEVER "johns" or "tricks") are treated with nothing less than love. Just like at her husband's establishment, weird things have a way of happening around Lady Sally's House. A man comes in with an indefatigable erection. A woman arrives with a unique piece of jewellery that allows her to stop time. And so on. 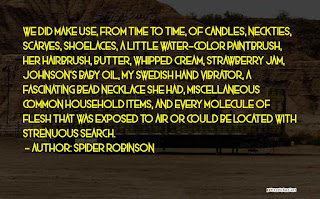 Callahan's Place went through a nuclear explosion and a couple of incarnations, eventually ending up in Key West, Florida. (The story of the relocation is recounted in CALLAHAN'S KEY, and it was this book that convinced Eva and I we had to see Key West. It lived up to expectations.

If I could pick a fictional world to live in, it'd be Callahan's (and Lady Sally's), without the slightest hesitation.

Spider's standalone, non-Callahan novels are also excellent. I would particularly recommend these three:

THE FREE LUNCH: Dreamworld is the apotheosis of theme parks: Disney has nothing on this place. Pre-teen Mike's greatest ambition is to go "Under" and live in Dreamworld indefinitely. He manages to get in undetected by everyone except Annie, a dwarf who has been Under for much of her life. Together, they must confront and defeat a threat to Dreamworld that they can't even understand.

VERY BAD DEATHS: What do you do, if you have iron-clad knowledge of a planned homicide of incredible depravity and cruelty, but have no evidence that would convince anyone "in authority"? This is the problem that faces Zandor "Smelly" Zudenigo, a telepath and hermit living on an island off Vancouver, when fate causes a serial killer to overfly his island while thinking about his next planned multiple-murder. What can he do, especially since Zandor is incapable of turning his telepathy off, and exposure to other minds is excruciatingly painful?

DEATHKILLER: This is, for me, Spider's pièce de résistance. It's actually two linked books, MINDKILLER and TIME PRESSURE. I'm going to steal Spider's own words for the description:

Book one: Wireheads, addicted to an electric current fed into the pleasure centers of the brain, are the new junkies. Karen, a former wirehead who barely escaped death by pleasure, is determined to bring down those who sell the wireheading equipment, but she and her lover Joe instead turn up evidence of a shadowy global conspiracy-not to control the world, but to keep anyone from realizing that the masters of mind control have been controlling us all for some time now . . . .

A lot of how I present to the world, I owe to Spider Robinson. My empathy has been called "relentless", and it is, and while I've always had empathy to spare, Spider augmented it immeasurably.

I live by this one: "there's nothing in the human heart or mind, no place no matter how twisted or secret, that can't be endured - if you have someone to share it with."

I've shamelessly stolen more than a few of his atrocious puns. (Oh yes: they pun in Callahan's. A lot. Some of my friends would say it's oh-pun season on good taste.) Let's see, here's a good one:

On a planet far away, there is a sentient being the size of a cliff, buried in the ground. Scientists have been studying this huge thing for years: it's got eyes, a nose, a mouth...the whole shebang. Its brain is positively massive. But it doesn't seem to communicate at all.
They've analyzed all the spectra of light and sound and magnetism and every other force they can imagine, looking for emanations from the being, without any luck.
One day a scientist decides she's had enough. "How can something with a brain the size of an apartment block, with eyes and ears and a mouth, go this long without communicating?", she yells.
It just so happens this is the first time anyone's asked the creature a direct question. Slowly, ponderously, the being lifts itself out of the ground and extends to its full height, towering over the researchers below.
"IT COULDN'T", it bellows in a bass rumble that shakes the ground, and then the thing slides back down and almost disappears.
"Of course," the researcher thinks. "IT ONLY STANDS TO REASON."

I try to be as mellow and laid back as Spider and his characters are, and I'm never afraid to laugh at myself: 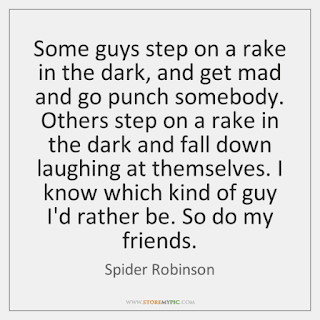 And finally, of course,  I'm sure I have (gently) pounded Callahan's Law into a few heads by now: 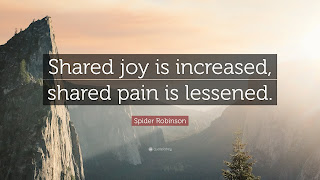 It makes my heart sing to see he's at least engaging with the world again. I hope he gets around to writing more stories, Callahan's or no...this world desperately needs his voice.