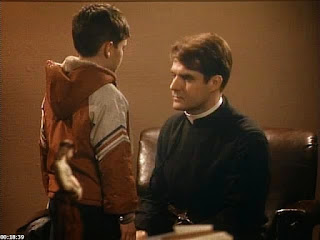 image from "The Boys of St Vincent"

Yes, I'm writing a lot lately. It's a good way to pass the time between tasks at work.

One of the perils of frequent blogging: inevitably there comes a time when you put up a blog a few days early as current events take a sudden twist. Or you put up a blog with a provocative title like "Sex and the (Catholic) Church" -- about their misogyny and their insane policy against contraception -- only to have a darker insanity rear its ugly head, AGAIN, a few days later.

Michael Brendan Dougherty tells it like it is here. It's a masterful takedown of the Church's continually tepid response to the widespread molestation of children.

It's that tepid response that really infuriates me. "We are deeply saddened..." ... that you found out.

There are monsters who will prey on children everywhere. I don't mean to suggest that they're hiding behind every bush, but they are scattered throughout all walks of life. I tend to think they do concentrate around the priesthood of the Catholic Church, simply because over and over, the response of the Church to another disclosure of child-rape has been appealing (to the monsters) and appalling (to non-sociopaths).

There, I said it. The Catholic Church's attitude on child-rape is sociopathic.

Sociopaths have no understanding of right and wrong. They tend to define right as "whatever benefits me/makes me feel good" and wrong as "whatever restricts me from benefitting/feeling good".  Even a staunch atheist can tell you this attitude is as far from Biblical as you can get.

Yet it's demonstrably, consistently, the attitude of the largest church in Christendom to acts so heinous I refuse to describe them: oh, shit, we got caught again. How can we minimize this? They only caught three this time...let's make sure the other eleven names don't come out. Better move these priests off to a new diocese where they can have a whole new crop of victims to abuse.

Oh, my apologies. They go to "rehab", first. THEN they get a whole new crop of victims to abuse.

If anything sickens me more than the actual acts of child abuse, it's the institutional non-response to them. Over and over and over again.

I wonder how many of my readers have seen The Boys Of St. Vincent (1992). Probably not many of you. In this film, a retelling of all-too-sickeningly familiar events at a Catholic orphanage (Mount Cashel) in St John's, NL, Henry Czerny gives a bloodcurdling performance as Brother Peter Lavin...a performance so chilling that he reported for years afterwards parents would see him walking down the street and run to the other side, hurling abuse. (Not the first time, or the last, I  marvel at people's  inability to tell a person from a persona.)

The Boys of St Vincent was even more gripping than Spotlight (2015), about the Boston Globe's tireless efforts to unearth widespread child abuse in the Archdiocese of Boston. THAT movie won the Oscar for Best Picture in 2016 and supposedly "shook the Catholic Church to its core."Apparently the Church shook it off, because not three years after Spotlight was made, more disclosures are bursting forth involving hundreds of priests in just six Pennsylvania dioceses. You start wondering if the real reason the Catholic Church hates abortion so much is that it deprives them of playthings.

It's not a blind eye. It's a lasciviously winking eye.

I had high hopes for Pope Francis. In many ways he's been a breath of fresh air for the Church. But in this critical area he has been another abject failure in a long line of abject failures.

Any claim the Church has to holiness and sanctity is utterly hollow, and will be until the following, AT A MINIMUM, is implemented:


Those last two points may seem radical to practicing Catholics. They shouldn't. There have been married POPES in the past, including Peter, the very first one...so married cardinals, bishops and parish priests really isn't that much of a stretch. As for women, it's long past time the Catholic Church stopped with the two-faced treatment. If a woman can be a saint, and many are, then for Christ's sake, a woman can lead a church. And I mean that quite literally: for Christ's sake.  Allowing Catholic clergy to have healthy sexual relationships will go a long ways towards eliminating the profoundly unhealthy ones so many have.

And that's all I have to say about that.