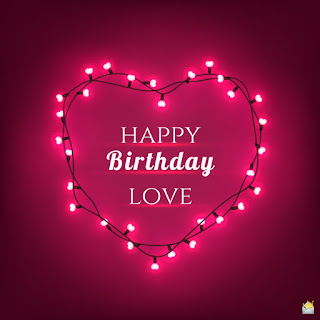 Without further ado, the amazing woman that is my wife, Eva:

I know I need to write this.   I need to explain.   I need people to understand the wonder.  The fear, the hesitation… the future.
Have you ever had a close call?  A really close call, I mean.  The upside down in the ditch, the near miss, the heart pounding realization that you just about died?   I’ve had a couple.    Interesting, some of them I guess.  Funny - sure I suspect.  But mostly what I heard my whole life is a chant of sorts… gonna die young, gonna die young, gonna die—

It was mostly an outside chant.   A cacophony of noise from everyone, doctors, specialists, nurses, coworkers, friends, family…me.   I’ve told very few people this, but growing up, I was never able to picture myself a mother.   I never dreamed of being pregnant and having a child of my very own to watch and love and nurture.  I mean those literal dreams as well as those daydreams that women have, or are supposed to have.   To be honest, I wondered (knew more as time went on) if it made me just strange, or wrong, or even not a real woman.   Don’t worry, I eventually realized that this was normal for me.   Just as how you see your future is normal for you.  That doesn’t mean I didn’t try to shape that… nothingness… into a future where I could be a mother.   It truly was something that I thought was one of the more important things in my life.  I tried.   I really did.  Ken has blogged on most of it, and I just chalk it all up to life experience.   It made me tougher, stronger and more able to help other people deal with some troubles in their life.  And it took its toll.   Ken, again, has said just about all I care to share about that time in our lives.

Oh yes, the cacophony.   Managed to escape it for another one that was, gotta be a mom, gotta be a mom…
Next secret.   I’ve never really seen myself old.  I’ve heard it often enough.  Never going to grow old. Repeated it often enough.  Never going to grow old. And worst of all, earned every last bit of it.   I could list off the bad things.  The accomplishments.  The good things I started doing and the bad things I stopped doing are long, and some of them repeat.  It would make this post tedious, if a bit *wow, how exactly are you still alive now?!?*   If you are going to go out with a bang, do it yelling and screaming - sliding into home base all dirty and scuffed.  Happy.  Experienced.   Eyes clear and opened.
This was my motto for a great length of time.
Medically speaking, however, consider these sticks of TNT.   Diabetic.  Smoker.  Morbidly (morbidly) obese.  Drinker.  Other kind of smoker.   Tried a whole bunch of other things.    I did a life expectancy calculator thingy once.   It pretty much stopped half way through the test and asked me if I wanted them to call a coroner :). They were about to go to negative numbers.  But I also did things like work out.  Regularly, and with trainers.  I spent a fortune at gyms.  Endured humiliation after humiliation from people at gyms.  You wonder why people who really need the gym don’t go?   Ask one of them.  I dare you.
My blood pressure was bang on normal.   My diabetes was actually very well controlled.

Sigh.   So one of the consequences of being pregnant for me was raging uncontrollable diabetic highs.   I would get pregnant, and my sugars would skyrocket pretty much overnight.   A diabetic who has successfully maintained a pregnancy long enough to make the offspring viable will tell you that you MUST keep perfect…PERFECT…blood sugars if you want to have a baby.  So I would immediately up my insulin dosage.   I am not a type 1 diabetic.   Fun fact - if you are a type 2 diabetic whose sugars run out of control, you need to take insulin if you are even trying to get pregnant.   So  I had to try and react fast enough to stand a chance of keeping this baby,  or any baby.
You all know it didn’t work.  What you may not know is that every time I got pregnant, and lost a baby, my sugar would not go BACK under control again.  I had to maintain that level of insulin, and up it again the next time I got pregnant.   So during all this, we discover that I have something called insulin resistant diabetes.   This means that I do not process insulin like everyone else.   My insulin receptors, for lack of a better term, are very very small.  And blind apparently. So I have to flood my body with insulin several times a day.   If you understand anything about units of insulin you will know that taking 300 units of insulin a day is a scary, ridiculously high number.   And freakin’ expensive.    An eyebrow raising, needed to get special blood tests to prove that this was real, and that I was not supplying another diabetic with my insulin kind of thing.   I could have and probably did try to tell them at one point.   I’ve been resistant to pretty much everything else, why not insulin??  Why the fuck not, I say to myself.   I’ve said it before, I’ll very likely say it a number of times again…

So by the time I was 40ish, I’d gone through more than a handful of miscarriages. I weighed  more than 400 pounds, and I was taking huge quantities of both insulin and anti-depressants.  I had suffered a nervous breakdown at some point and the resistance thing was taking its toll on how my meds were absorbed - more so when ingested instead of injected.
It was enough that I sought the thoughts and advice of my closest family members, and started to think about getting that stomach stapling surgery.
Fast forward to just before the surgery.   It was going to be hard.   I didn’t even know how hard then that it was going to be and I was scared as hell.  But I persevered.   And I got a picture of my beautiful niece on my knee.   Taken by my mom.   A lovely cutesy moment of aunt and neice.   And my resolve became steel.   Immutable.

And so I had the surgery.   During the following five years, I was still quite unsure that I had escaped the…nothingness that was this non-dream.    I had another one of those close calls.  Those heart pounding ones.  And it lasted for a scarily long time.

Last secret, not so secret.   I’ve heard that the birthdays that the ‘normal’ people are scared of are the big ones - 30, 40, 50 etc.   Never been that way.   When my 9 comes around, it causes a profound funk.  I guess its because it is the last of its kind.  My mind turns to the past and what I grew, became, loved during the past decade.   Did I do enough?  Did I make my presence felt enough?  Was I kind enough?   Will karma smile on my selfless deeds and forgive me my selfish ones?  Will I be missed?   Those are some pretty soul deep questions.   They take a long time to determine, and to reflect on what you want to bring into your existence for the next decade.   I guess to bring yourself to the next grandest version of the greatest vision of who I am.   And mine always stopped at 49.   I’ve expected this to be the end, or very near the end, my whole life.

Until about six months ago I was still on pretty shaky ground.    I felt I was stable, I acted stable, and was almost there when that last bit of quicksand firmed up and I was on solid ground again and running.   I’ve not looked back and am deliriously happy.   Have been for a while now.   Expect it to run a long long time, universe allowing.

This 9.   This 49.  I have plans.   They are wonderful, exciting, scary, long range plans.  I had the opportunity to get another picture taken in the same spot, same niece, just a couple weeks ago.   Both pictures side by side are a testament to the power of love.   I laugh, with pride mind you, but laugh at the difference.   My new picture looks like I melted like a candle, lol.    I’m going to be making an appointment before the end of the year to ask my doctor to refer me to someone who can do a little ‘belly-ectomy’ on me.   I’ve reached a point where this is my reward, and the thing that became my goal as I went through that hell.   The reward for losing my teeth, and having to take a shit ton of pills every day for the rest of my life.   My hopefully very long life.   I bear the scars of bat wings, and floppy boobs, and the little turkey neck with pride.   I don’t want to go through the expense and agony of having that much skin removed.   But that one thing.   Yay me. 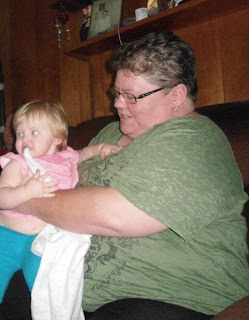 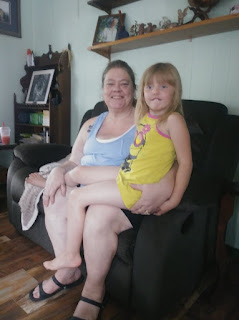 You who are reading this. I will be thinking of you.   I always do, but I will be thinking about you a lot more this year.  I hope that you will continue to be a part of this scary new ride I’ve started.   I am going to try and tell you that I love you more, but never forget it at this or any other moment.   I love you.

Ken here. Eva-love, I have....barely...only seen you through one "nine" year before. You were strong then, and everything that has happened since...a lifetime of things, both triumphant and tragic...has made you stronger still. But you've never hardened. You're still the soft, sweet and utterly selfless woman I met and married all these years ago.

I love you very much. Always will. Happy birthday.