Should I Stay Or Should I Go? I Left.

I've been a member of a secret group on Facebook for a couple of years. It exists to help people in all types of relationships. Sometimes we need a safe space, a space where people understand without tedious explanation.

I've asked for and received some very helpful advice there. So have others I know.  It really has been a kind of online oasis.

But I've felt increasingly unwelcome there of late, and tonight it came to a head.

WHAT DOES IT MEAN TO BE POLYAMOROUS?

To me, it means having the opportunity to allow relationships to evolve however they will, regardless of the presence of other relationships. It also means acting ethically, honestly, and with care towards all involved.

That's all it means.

Polyamory is a relationship paradigm. It certainly may inform one's political views and spiritual practice, but it doesn't automatically suggest anything about either.  That's my view. It's most emphatically not the view of others.

I've been feeling this for a little while now, ever since I got ripped a new one for abbreviating polyamory as "poly" and causing the millions
of Polynesians who read my every utterance to feel erased. Or something. I am completely unrepentant on this. I am not going to start calling myself 'polya' or 'polyam' because "poly" erases people. As I said there, if you can be erased by a word, maybe you don't exist in the first place.

Then I found out "folks" is not gender-neutral enough. THEN I found out "spook" is problematic because some people use it as a racial slur. (Spook actually derives from the Dutch for 'ghost'.) In related news, we need to find a new name for the breed of cat formerly known as "Maine Coon". Small cracks must NEVER be called "chinks". The Irish can't dance 'jigs' anymore, but not to worry: to reciprocate the Thais won't grow their rice on 'paddies'.

If you see racist slurs in innocent words, YOU'RE the problem. And if you go through life looking for things to be offended by. oh how you will find them.

I am all for respecting others, including those who are marginalized. And believe it or not, I do recognize that my lived experience is not that of others. I understand, for instance, why if you are black, your opinion of the police will be different from a white person's. And you have ample reason for that opinion (that the police are an adversary), given that police stop black people because they're black and often shoot them because they're black. White people call the police on black people for awful heinous crimes like barbequing, selling water, and sitting peacefully in a Starbucks. Colin Kaepernick gets death threats for peacefully protesting this sort of thing. Colin Kaepernick is, of course, black.)

So yes, I understand this. But understanding is not enough. 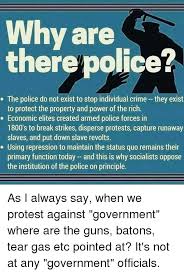 
to the group tonight. You can be forgiven (only by me) for asking what this could possibly have to do with romantic relationships.

The person who posted this, who goes by a very elaborate pseudonym, argues that we should all be working towards a world where the police don't exist: where all people are raised to respect others and godamnit this sky-pie is delicious, isn't it?  If you don't hate cops, it's a deal-breaker for this person. No word on how long they'd last in a world without police. (There is no world without police--call them the mafia, call them a warband, call them whatever you want, without police that's what you get to take their place.)

Okay, hey, it takes all kinds, right? I've already expressed polite opposition to this 'fuck da po-po' bigotry and backed away. A fellow group member asked me via private message for my opinion on the thread. I hadn't seen it evolve.

Oh, wow. An actual police officer entered the fray and gently, calmly, using all the correct 'woke' language, asked what he could do to make the original poster feel safer. Turns out the answer is 'nothing'. His very presence threatened her.

I'm not a police officer. But I love many of them, and I have repeatedly defended the good individual cops I know and love, while decrying a system that does allow 'bad' cops to flourish. I even know an officer who is herself a member of one of those minority, marginalized communities.

I'm not a police officer, but I know and love a bunch of them. I'm therefore threatening, too. I'd best leave. So I did. God forbid somebody should find me, of all people, threatening.

And this is how it perpetuates itself, the polarization. Only "acceptable" views are welcome. I deliberately lurk in places I know my views would get me (metaphorically, and hell, maybe even literally) burned alive. Doing so has taught me a kind of radical centrism. In this day and age, accepting that different people can be right about something is a radical concept. Knowing I'll never be regarded as anything other than an enemy for my thoughtcrime, though,  makes me feel unwelcome. Ironically enough, in something I had thought to be a safe space.

It's getting so that acceptance isn't good enough. You have to love what someone else loves, hate what they hate, and conform to every last group opinion, or you're "toxic" and "threatening". Grow a fucking spine.