Eighteen Years of Eva and Ken 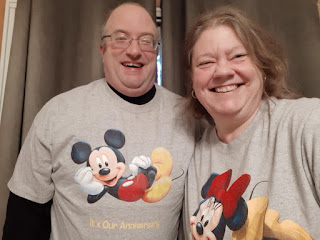 After eighteen years, twelve of which have blogs commemorating the occasion, you might wonder what more I can possibly say to you about our anniversary, our marriage, our love.

People have questioned us from the start, haven't they, love? My mom hated you on sight. I think she would have hated any woman in your shoes, stealing her little baby out from under her,  especially since that "little baby" really, really want to go and grow up. But you were Eva-on-the-spot, and you handled it beautifully.
Your family had no idea what to make of this boy, so different from the men you had brought home before. I can't blame them. At the time, you were the only one who had any idea what to make of me, and I include myself.
We both know that my mom grew to love you very much, so much that she never lost your name as dementia sank its talons into her. She asked after you by name two hours before she died, on a day when I'm pretty sure she had no idea what century it was.
And your family, starting with your brother, came to understand that I love you, and maybe grasp how much.

I've always been a tad defensive writing about you, about us, because once the first round of questions was settled, a new round of statements took their place. Ignorant statements about relationship dynamics, usually centered on how weak I appeared to be and how strong I "let" you be. Those statements, love, bothered me more than the questions had. You know and I know that ours is a marriage of equals, however it may appear to others.

Those died out, finally, right around 2014, just as we were giving the world a whole new reason to ask questions. Pointed, barbed questions, this time. Gloom was widely assumed and doom was assured and that demanded rebuttal and explanation. At length. A new wave of questions came when the woman you initially urged me to befriend became a partner in due course. I'm still answering those, love, and may be for some time yet.

(Also Mark and Kathy. They've never questioned us either.)

Yes, a lot has changed since we expanded the relationship and welcomed other partners, other commitments. Some changes have been expected, others not so much. But some things have not changed. The fundamentals. "The fundamental things apply as time goes by."

Love, it's impossible not to respect you. Your intellect,  your open-mindedness, your fierce curiosity and drive, your stick-to-it-itveness, your self-awareness, and those are just the internal self-directed qualities.

We have supported each other in so many ways over the years. You've both broadened and deepened my mind; I like to think I've done the same for you. You've backstopped every step I've taken in every aspect of my life; you continue to. There was and is nothing I can teach you about confidence, but I've helped you slow down your fevered pace and keep you centered. We've had ups and downs financially and emotionally, but in all that upping and downing, we never went sideways, you and I.

These are the unquestioned attributes of a relationship that is standing the test of time. We may not have the little things in common...your taste in TV shows is atrocious, love...but the big things? Like the businesses say, for the most part our vision and our values are aligned.  And the biggest thing you and I have in common?  We don't build these relationship thingies half-assedly. Any of them.

Eighteen years. Almost twenty, really, since we were for all intents and purposes married on the third date. Year after year of me reeling off inspired puns and you responding with curses and insults; of me setting off intestinal fireworks and sending you reeling off walls; of both of us together compiling an inexhaustible supply of shorthand in-jokes, such that we can carry on a full conversation using only other people's words. Three homes, five jobs for each of us, seven pets and counting. The loss of two hundred pounds, and all the gains that came along with that. Shared pain that lessened and shared joy that increased.  And beneath it all, the basic building block upon which all enduring love is built: unassailable friendship. "The companion of my journey, the friend to my life", as we said on this day eighteen years ago. It's still true.

I've made a point, since 2014, of not mentioning others in these anniversary blogs. That's because, as undeniable as their existence and importance is to us, this day is about you and I. But I want to tell you something.

I love you even more since Mark came into your life.

It only stands to reason, that if one man's love is fulfilling, the love of two is overflowing. And the effects of that overflowing love make you even more loveable than you already were. That's saying something, love. That's saying more than I can with my words alone.

I love you. Always have, always will. Happy eighteenth anniversary.

Here's to many more!