Several times in the last year or two, I have dreamt that we won $80 million playing Lotto Max.

This is kind of neat for a few reasons. The first is that I can count on the fingers of one thumb how many times we've played Lotto Max (or any other non-charity lottery) in the last couple of decades. "Playing the lottery" is just a shorter way to say "setting your money on fire", and quite frankly, our heating bills are high enough.

It's true that Eva and Mark and I have gone in on the Princess Margaret lottery a couple of times now.  To us, that's more of a charitable donation. And yes, I know that Ontario uses its profits from lottery sales for all sorts of good things. It doesn't stop me from snorting when I overhear old fogies complaining about their tax burden while they check six months worth of 6/49 tickets.

Aside: Mark finally gave me an answer to an eternal question of mine: why wait to check your tickets? If there's the slightest chance I'm a multimillionaire, I wanna know like yesterday.
Because, says Mark, it's easier to hold on the the dream that you MIGHT be a multimillionaire than to accept the crashing reality that no, you're not.

Not a satisfactory answer, but an answer. Maybe it's because I don't bother dreaming (awake) of being a multimillionaire all that often. I like my dreams kind of plausible. Besides, my "crashing reality" isn't all that bad.

The second reason my recurring nocturnal transmission is neat is that it's always exactly eighty million dollars. Why eighty? I have no idea. The word 'eighty' has no significance to me beyond a silly pirate joke ("what did the pirate say on his eightieth birthday?" Aye, matey!") The largest Lotto Max jackpot ever was a trifling $60 million. But no, it's always $80000000.00. If I ever see that projected payout on Lotto Max, I'm thinking maybe I should buy a ticket.

The third reason this is neat is that, even after nearly half a dozen replays, I can't decide if this is a dream or a nightmare.

I don't know how the rest of you dream, but I live mine. That means many of my nightly reveries come not just with a plot, but with emotional involvement. So when Eva -- it's always Eva -- announces we've won, there's the standard moment of euphoria, followed by a debilitating now what? that carries with it more than a whiff of real terror.

I've thought about it, of course. Who hasn't imagined winning a huge jackpot?  The things you'd do, the places you'd go, the people you'd help out if you suddenly came into (in the case of $80 million) approximately 0.0005% of Jeff Bezos' fortune, tax free.

Entirely hypothetically, since dreams aside this is not going to happen:

The Ontario Lottery and Gaming Commission absolutely requires a photograph of you with your big shiny cheque and strongly encourages a press conference for mega-jackpot winners. The idea behind the press conference is that it's given at OLG headquarters, not someplace you don't want it, like...your house. But why publicize it at all?  This is done, supposedly, "to protect the integrity of the game". If nobody ever sees jackpot winners, people might get the idea nobody ever wins jackpots. I get this, but at the same time...come on.

Let's say you win a huge amount of money, like, maybe, oh, I dunno, $80 million. This is splashed all over the media: "JEN DOE OF WATERLOO ONTARIO WINS MEGA-JACKPOT". Sub-headline may as well say: "WITH ONE SIMPLE GOOGLE SEARCH, DISCOVER WHERE UNTOLD RICHES AWAIT YOU. BRING A GUN."

Don't laugh. It's happened many times.  Over much smaller amounts of money.

So my thought process goes like this. We're not getting that money right away. As insane as this sounds, I have to save up some money before I can collect that money. Maybe the bank would front us some, given that enticing collateral, I don't know. But we'd have to figure out where to bring, at a minimum, the polycule, including Jade, plus anyone else who feels like they're maybe a little...warm. Plus Dolly and Bubbles and Luna. "Gather anything money can't replace and come to this safe space until the money clears and we figure out where to go from there."

After that? When we're newly wealthy beyond my wildest imaginings?

The first thing I'd do is see how much of that money I could get rid of....FAST. I don't fancy the idea of a target on my head and the heads of my loved ones. Nor, quite frankly, do I want to be that rich. All I have ever aspired to be is comfortable. I'd scale that up some, but not as much as you'd think. More on this below, after I've got rid of this burden. (I know, I know, just give it to you,  right?)

I would engage a professional researcher to determine the worthiness of the charities a sizeable fraction of the winnings would be ceded to. There are entirely too many charities which seem predominantly to be in the business of perpetuating themselves. There are others which do use the vast majority of the money bequeathed to them for charitable purposes, but which exclude, for instance, LGBTQ+ individuals from help out of some monstrous sense of "morality". Those charities too would see nothing from us.

I'd be mightily tempted to follow Spider Robinson's ingenious prescription for getting rid of vast sums of money quickly and ethically. I've detailed it before, but for my many new readers, it goes like this: go to a law school. Find someone who just missed a major scholarship. Offer to pay her way through, living expenses included, in return for her signature on a written and vetted agreement to provide free services for us and our closest friends, as needed, in perpetuity. Go to a trade school and repeat for each trade we could conceivably foresee a need for.

Okay, now we're down to an individual level. This is the part I fucking DREAD.

Rule #1: ANYONE WHO HAS NOT CONTACTED US IN THE YEAR IMMEDIATELY PREVIOUS TO THE OLG PRESSER GETS NUTS-ALL.

That may sound harsh. So is ignoring someone for years, finding out they're  suddenly wildly wealthy, and slinking up from the sewer to see what you might be able to claim. I wouldn't do it to you...

And no, I'm not going to spill out here how much you'd get.  I'm disinclined to bail out people who have been living well beyond their means, but that'd be up for discussion. Trust funds would be set up. I think we'd be more likely to do things like pay off mortgages than give you x dollars. Because I know damned well no matter how generous we are, with somebody or somebodies it's not going to be generous enough. Huge amounts of money do awful things to most human brains. Assuming we get through that only mildly scathed, with a minimum of friends and family forever lost...

Put aside  $5 million of that for our latter years. This might surprise you, but I'm not going to state flat out that I'd never work again. I certainly wouldn't work for a few years, and if and when I ever do, it would be entirely on my time and terms, doing something I love.

I'm not going to lie and say my lifestyle wouldn't change. Of course it would. There would be a house built somewhere on a river or lake, remote but not too remote. Said house would not be at all ostentatious: it would have a standard number of bedrooms and bathrooms (I've never understood the idea behind "four bedrooms, nine bathrooms"). The rooms would be large, but not intimidating, and it would be all on one floor. If I had my druthers, wood would feature prominently. So would solar panels, wind power, water power, anything to get us off-grid.

I'd indulge in one extravagance of mine, within reason: art. Landscapes, especially. We currently own a single piece by Brent Townsend the man who designed the toonie. More in that vein. 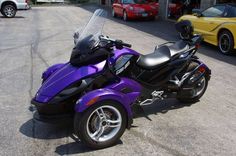 because, while the idea of employing a chauffeur does appeal, what appeals more to me is the wind in my face. This, as I have discussed before, is the closest thing to a car I'm likely to ever drive no matter how much money I have to my name. The plan is to get one, and an M3 license to go with it, in about 7-10 years. A lottery win would accelerate that plan like a bat out of hell.

Travel. In the real world where eighty million dollars is just a recurring dream, my current focus is on making one travel wish come true for Eva and for Kathy. With Eva, it will almost certainly be a train trip across Canada culminating in an Alaska cruise. (Will she still want to go? Alaska.) Uh, sorry, that's truly a bad pun.

With Kathy it will be Hawaii or bust. Both trips, in case you're wondering, were on my bucket list long before I met either of them, so this isn't pure altruism.

We've also got plans to take the nieces to Disney World once the Orange One is out of power.

In a different world? Travel would be a lot more commonplace, but I don't think I'd be constantly gallivanting all over the planet. I love experiences, and one experience I love very much is...coming home. That said, Eva and I want to do a European river cruise. Kathy and I really want to see Pompeii. I'd be grabbing Craig and taking him to the British Brass Band Championships. You get the picture.

But I'm a simple man with simple tastes. I don't have champagne wishes and caviar dreams. (Caviar's gross.) $80 million wouldn't change that. That European river cruise? Eva and I have talked about that. We'd want one that isn't frou-frou...a cruise that doesn't demand white tie and tails, and doesn't serve things like goat's anus tartare or roasted squirrel testicles in a whoopping crane blood reduction. If that's the kind of thing on offer, no thanks, I'll stay home.

This isn't going to happen. Unless I keep dreaming it does...

We have lots of fun conversations about the things we would do with a giant jackpot too. I think we would do things much like you outlined above. We talk a lot about starting an animal sanctuary. Beloved and I were both quite poor when our kids were small, so finding some young families to help out would likely figure large, as well as spreading some money around for various tuitions and things.

We don't really have any desire to be fabulously rich. We are lucky to have a (slightly better than) comfortable life and we are grateful for it. I don't personally know anyone with a lot of money who is actually particularly nice OR happy.

I'd rather feel content than worried all the time, so once most of it had been given away, what I'd really like to do is learn things.

I usually only buy a lottery ticket if a whim catches me and then I pretend it is intuition and carry the ticket around to dream over it for a few weeks.