Now here's an interesting topic. How does one of them "spiritual, but not religious" people approach grace?

Well, I try to bow out of saying it if possible. I don't feel comfortable thanking God for food that I know came from farms and factories. I tend to gag on phrases like "and these Thy gifts from Thy bounty".  If pressed, I will say something along the lines of

All that we have is a gift.
May we be thankful.
May we celebrate.
May we share.

...which as far as I can see and say, maintains the spirit of a grace without invoking a deity.

But grace with a capital G...that lands me right in the thick of a discarded Christianity. Wikipedia has this to say as far as a definition:

In Western Christian theology, grace is "the love and mercy given to us by God because God desires us to have it, not necessarily because of anything we have done to earn it". It is not a created substance of any kind. ... It is an attribute of God that is most manifest in the salvation of sinners.

The first sentence is gorgeous, and matches my sense of a God Who loves unconditionally. That last bit, though, the "salvation of sinners"...that's where the holy water starts to sizzle and burn. If this God salvated all the sinners, well, then we wouldn't have an issue. But it doesn't work like that, at least according to everything I've read and heard from preachers in Christian churches of various denominations. Turns out that there are a whole bunch of conditions you need to satisfy to earn the unconditional love of God. And it goes without saying that we've earned it, or at least are closer to earning it. You? You're going to hell.
To be fair, two Popes have now indicated what should have been obvious all along: there is no literal Hell. You won't find it mentioned in the Bible...well, you might, but every single instance is derived from four words:

Both these words actually simply translate as "the grave". If you want to be a little more poetic, you can certainly say "place/state of death". But no sulphur, no brimstone, no cheeky little devils running around pitchforking people.

Here we have a more hellish word: this refers to the deepest part of Hades and it does imply eternal torment. Aha, you say. There's Hell. Not quite. First off, this word appears once in the entire Bible (2 Peter 2:4). Second, it's a word, like Hades, from Greek mythology. Do you, a devout Christian, want to use Greek mythology, with its alien and blasphemous pantheon, to guide your understanding of the Lord God? You do? Okay, then you should know that that single verse isn't even talking about wicked people and where God puts 'em: it's where the fallen angels went.

This leaves us with:

This was the only word Jesus used, allegedly referring to "hell".  Wanna see it? I've got a picture, courtesy Google Maps, infernal division. 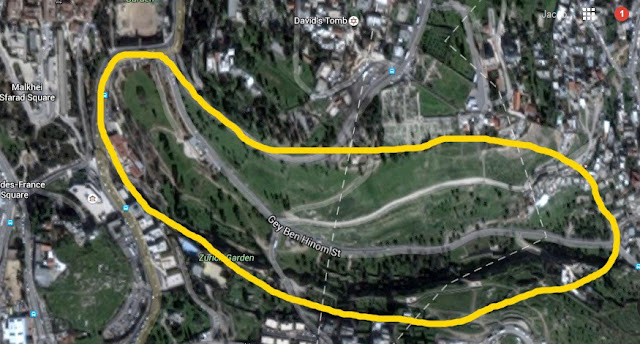 There it is, a valley outside Jerusalem that was, in Jesus' time, the site of the city dump. Which was kept burning 24/7. Anything unwanted was thrown in the fiery put to burn up. Great body disposal site, and yes, it was used that way. You can maybe see where the evil reputation came from. Even worse, Gehenna was a place where dirty deeds were done dirt cheap in the service of the wrong gods, so of course it's got an awful stain on it.

Let's look at one famous verse where Jesus talks about Gehenna, Matthew 5:30. "And if your right hand causes you to stumble, cut it off and throw it away. It is better for you to lose one part of your body than for your whole body to go into hell (Gehenna).”

Remember, Jesus was Jewish. In Hebrew eschatology, the body is useless after death, while the spirit is preserved. So what Jesus is saying here is that cutting off your hand is better than a lifestyle of sin that will result in your body being tossed into the dump. Jesus makes five other similar references, just to drive the point home. He also called the Pharisees "Children of Gehenna" and that must have annoyed the fuck out of those pious, sanctimonious bastards. Jesus is saying "I see right through your fake righteousness, guys. It won't help you, your bodies will still get thrown on the trash heap with those of the poor."

There are two other references Jesus made to Gehenna that are a little more topical. In Matthew 10:28 and Luke 12:5, Jesus says: "Do not fear those who kill the body but are unable to kill the soul; but rather fear Him who is able to destroy both soul and body in Gehenna.”
Ohhh, that sounds more like hell, doesn't it? Except for that word "destroy". Where's the eternal suffering?

It isn't. Because eternal suffering is not Biblical. It is, instead, a creation of one John Milton, he of Paradise Lost, which, last I looked, is not the Christian Bible.

It's truly distressing how many pastors and priests still preach hellfire and damnation. It really makes you wonder what else they're getting wrong, when they can so fundamentally mischaracterize their all-loving God as a genocidal monster.

I got sidetracked. Tends to happen when I drag out my Bible.

Grace. I'm not going to bore you with the Catholic lore on grace, you'll be snoring in major thirds if you aren't already. I will only say that different Christian denominations have vastly differing ideas on who earns it and who doesn't. Usually it boils down to we do and you don't, but you could, if only you were more like us. And that, more than maybe anything else, is why I won't attend a church unless  Love is its doctrine.

But you know something? You don't need to believe in God the Heavenly Father (of course He's a father, what, you think we'd deign to worship a female deity? To Gehenna with you!) ... to believe in grace. Or in providence. I do believe in a Higher Power, much larger than the one-gender, one-role Christian God, and I further believe that when we act out of love (which is as good a name for my 'god' as any), we place ourselves at the intersection of providence and grace. Grace is also something we can find examples of, if we care to look. I like  (surprise!) to use a musical lens here: grace notes.

A grace note is an embellishment, an ornament, a little note or series of them that is not essential to the melody or harmony. Nonessential, but they definitely add sparkle to a piece.

And to your life. Look out for the little notes of joy in your day, and be grateful for them. Could be anything. A smile from a loved one. A sudden sunbeam piercing the clouds. The realization that this too shall pass. A quick kiss. The soft fall of rain. If you look hard enough, you'll train your mind to find these little joy-nuggets, and the more of them you find, the easier they are to find. Eventually, if you get proficient enough, you'll be seeing bits of love absolutely everywhere, and then, at least in my theology, you can be said to be in a state of grace.

That leaves us with the physical definitions of grace.

1:  "simple elegance of refinement of movement"

I'm noping right out of this, 'cause I ain't got any.

2. "courteous goodwill": "at least he had the grace to admit his debt to her".

I know a few people who took their social cues from Emily Post. They are never anything less than gracious: impeccable manners and politeness, saying all the right things. I don't trust that kind of grace one little bit, because I know it's often a mask over some extremely uncharitable feelings. Grace without warmth is a dead giveaway that the person is a phony and not to be trusted.

3. To do honour or credit to someone or something by virtue of one's presence. My loved ones have graced my life.

Thank you, loved ones, for gracing my life. I love you.

krishna said...
This comment has been removed by a blog administrator.
10:55 pm