Whenever I get to missing childhood (it does happen, strangely, even though my life as an adult is a vast improvement)...the thing I miss the most tends to be my dinky car collection. Hot Wheels, Matchbox, Majorette, Corgi Junior...the set numbered over two hundred at its peak. I had a couple of tracks, and also this 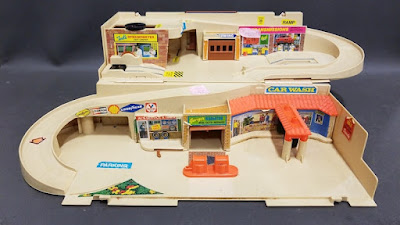 ...but didn't need them. Most of the time I just ran the cars sedately along floors or walls. I got in trouble for crayoning roads on the walls, and I remember being quite put out: where, exactly, was I supposed to run my cars, if not on roads? I had a few vehicles which, scaled up, would likely have had four wheel drive. But most of them weren't good for off-roading, and yes, I knew this at seven. This is a perfect example of how selectively literal I was: roads were necessary, but it was otherwise perfectly acceptable to run a car sideways along the wall, because in the real word cars run like that all the time.
Other boys played demolition derbies with their toy cars, and this horrified me. My dad patrolled highways and saw carnage up close and personal. People get hurt in collisions. People die. And the cars themselves, the cars my Mom bought for me with limited funds, would be destroyed. Why would I wreck my favourite toys? How does that make any sense?

I do recall one day when I engaged in destructive play. My bedroom had an alcove protruding out from the room proper. I took a belt and a coat hanger, hooked the former over the latter, and swung it around. It hit the alcove walls and left marks and the odd gouge where the buckle caught.  I knew I was going to get into trouble, but I kept doing it for a long time, almost revelling in the disruption I was causing.

Oh, yeah, I got in trouble, all right. But it was nothing to the trouble I gave myself. Doing that was wrong, liking doing that was much worse. I am, as you know, a child of a divorce that makes The War of the Roses look tame. It petrified me and disgusted me that I enjoyed damaging something. I never, ever did anything like that again.


I went through a maze phase in grade two, going so far as to sell collections of mazes for a dollar. Later, I started drawing up house plans, mall plans, and maps of cities. "McCallumston" took up eleven pages in my doodle book. I also read (of course, a lot) and played my piano. Once I got shoved outside, "play" consisted of riding my bike all over the city.

The common factor in all of this was solitude. I didn't even get the chance to play with other kids all that often, and didn't really know how. Whenever I went visiting, I'd end up playing with other kids' toys inside while they were outside playing games with those things I didn't have. Friends.

At school, on the playground...for the first couple of years, I threw tennis balls against brick walls. I tried to skip, with the girls--not out of any real desire to skip, but I loved the endless skipping ditties

Miss Susie had a steamboat
the steamboat had a bell
Miss Susie went to heaven
the steamboat went to
Hello operator please give me number nine
and if you disconnect me
I'll kick you from behind...

Third grade was  "fighting" on the "balance beam". This wasn't a real balance beam, but a brick wall/ledge about three feet tall and eighteen inches wide. I would meet each opponent and grapple with them, more often than not managing to lift them off the "beam" and lower them, gently, to the ground. I was GOOD at this, because opponent after opponent would take one look at Kenny the stick figure and underestimate the strength in my arms. Kenny, winner and champeen...until one day, the grade sixes decided to co-opt the game the grade threes were playing. The first sixer climbed on the beam, walked up to me, and never mind grappling, he casually, but with great force, kicked me in the balls. I went flying...and never played that game again. Joke's on him, though, because for the rest of the year I played kissing tag every recess and lunch. Kissing girls beats kicking boys in the balls, and it REALLY beats being kicked in the balls. (It was many, many years until I discovered being kissed in the balls...)

In grades four and five I played a lot of foursquare.  I also invented a game called Bockey, a hybrid basketball/hockey game played with a tennis ball. The rules were simple: if you didn't have a hockey net, you marked off the "net" with chalk on a brick wall. Each team would take turns on offence and defence. You dribbled the ball as in basketball, with its attendant rules against travelling and double-dribbling, and to score a point the rule was that the ball had to hit the ground at least once between your hand and the net. That game achieved a measure of popularity, even spreading to another school down the road.

Other kids are present at this point, but they're not exactly playmates. I'm a very sore loser and not a very gracious winner, and also I'm a teacher's pet (which is for some reason a very bad thing)...oh, and can you say "NERD", boys and girls? I knew you could!) Lots of other kids liked to play "games" by punching me, or better yet stealing my glasses and then punching me.


My first real friend was named Tim, and our games usually involved throwing things at each other. We worked at Cornell's Fruit Farm, and we'd pitch rotten apples at each other (if one of those things hit you, an explosion of unimaginable stench would follow instantly). Or there was the time I had a sleepover weekend at his place and brought one of those giant Sunmaid raisin bags. Tim's family was discovering desiccated raisin corpses for years.
But we also built snow forts and went hiking and actually did normal boy things normal boys do. In hindsight, grades five and six were the closest I got to a normal childhood, and even then I considered myself all grown up. I shunned "children's" things, especially comic books, which I maintained a very dim view of for a very long time. As usual with things I detested, the real problem was mine alone: I couldn't understand comic books. They had pictures I had trouble interpreting, and not enough words to explain them, not to mention all that violence...

I started playing Scrabble at four and Boggle not long after. I also played Aggravation, the Game of Life, and later, a raft of trivia games including the original Trivial Pursuit. My dad got a Pong game followed by a TRS-80 Color Computer, and I spent many hours playing Wizard's Key, Monkey Kong, and a few other games but mostly programming my own. At home, we had an Atari 2600 with Pac-Man and Space Invaders, both of which my Mom excelled at. After that came an Atari 800 XL and games like Choplifter and B.C's Quest for Tires.  Then joysticks evolved to have entirely too many buttons, and games got more and more complex until they felt a whole hell of a lot like work. If I have to study the gameplay, not to mention absorb hundreds of pages of lore...I'm outta there.)

The last video game I played and mastered was S.T.U.N. RUNNER. This was at the arcade up the road from Laurier, and I had the high school after investing something like fifty bucks. (This and Cameltry are my two favourite video games of all time. I didn't do as well at Cameltry, but I'd pay a fair chunk of change to play either of these again.)

Between those and pinball (my favourite machine ever was probably Creature From The Black Lagoon), I spent...more money than you would credit.

These days, the games I play (the ones I can write about here) are cribbage, both real and virtual; a slot machine game based on Game of Thrones, a tap baseball game, and Words with Friends/Wordscapes. I haven't played euchre in years, but really want to. And I'm not old enough for bridge, just yet. I also play, a lot, with myself words. Boring...if play can said to be. But that's me. Boringly playful.

I have two other associations when I hear the word "Play". The first is a stage production. I don't have much acting experience, chiefly because I can't act--it's part of that hard block I have against fakery. I'm me, I'm not anybody else. I have played Prosser, a bit part in our grade seven production of Hitchhiker's Guide To The Galaxy, and I played Toto in The Wizard Of Oz three years earlier. I'm told I brought the house down simply by lifting my leg to take a 'wee'...I have no memory of this. I've seen a fair number of plays, mostly musicals. Let's see:

And finally, there's  Play (1997) by Great Big Sea, which was the top selling Canadian album in Canada between 1996 and 2016. It contains the song Ordinary Day, which has these lyrics in the chorus:

Way hey hey it's just an ordinary day
and it's all your state of mind
At the end of the day
You've just got to say
It's all right...

I've got a smile on my face
And I've got four walls around me...