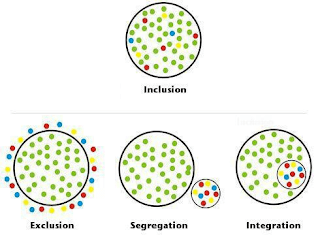 I have not experienced segregation, but the rest I know well.

The worst exclusion I ever felt was at Oakridge Secondary in grade nine. On the first day, I had several -- not one, not two, several -- people ask me what my parents did for a living. My answer was not satisfactory, and from that moment on, I was shunned. I'd walk into the caf and go to sit at a table, and every person at that table would get up and walk away. This happened day after day until I just stopped eating in there and started spending lunch hours in the music room.
That kind of ostracism is worse than bullying, in my opinion. Bullying is a kind of attention. Not a positive kind, no, but we are social animals and we crave attention. Being excluded provokes existential questions like am I here? am I real? that, left to fester, will corrode your brain until you're yelling S.O.S.
Integration isn't a whole lot better. Better than segregation, to be sure, but not much. For this, I have to go back to grade 7, St. George's Public School, the "gifted" program.
My parents put me into the gifted stream because, while I was excelling academically, I was failing, badly, socially. It was thought that placing me in a classroom with other "gifties" would make it easier for me to make friends. Not a bad thought....but oh, was it wrong. It was wrong because my classmates, to a man and woman, had different "gifts". If you're getting an idea of how much I hate that term "gifted". you win today's gold star. Gifted is what you are on Christmas morning. I am no more or less special than anyone else and I knew that in grade seven.
We were integrated, in the sense that we went to the same school as the 'danes. (Short for "mundane", and my fellow "gifties" loved to invest that single syllable with about a thousand syllables worth of condescension.) There was a definite divide. Relationships, for grade seven values of relationships, almost never crossed that divide: the 'danes dated other 'danes and the 'gifties' paired up amongst themselves. That would have been the year I bought a Gund teddy and a Valentine's card for Robyn only to have her pitch the bear in the garbage and rip the card up unread, still in its envelope. And   theatrically wipe her hands on her jeans to get rid of the cooties. Needless to say, I didn't pair off myself.
It was like a school within a school. The rules in the Land of Gifts were dramatically different, to wit: there weren't any. There was no homework. Once a month we had to present to the class whatever it was we were doing; the teacher existed largely as a research resource. The curriculum was practically nonexistent. This was fine, as far as I was concerned, for such subjects as English, geography, and history...but it did not set me up for success in math and science come grade nine.
We went on a trip to Ottawa that would make a blog entry in and of itself. We stayed at a Holiday Inn, four to a room -- except for Jonathan and I. My mom had called the school and raised holy hell on my behalf because, horror of horrors, four to a room meant two to a bed, and her son was not gay, thank you very much. The long and short of it was I got paired with Jonathan, the other class misfit--and thus earned a couple of extra heaping helpings of scorn.

Anyway, being integrated is not the same as being included. Take it from me.

After snooty Oakridge, I attended Westminster Secondary, the first place since Bramalea where I ever felt included. Westminster was different. It really seemed as if there weren't any cliques in the place. I was still a misfit, but my misfittedness was tolerated and at times almost celebrated. There was another misfit by the name of Kevin Sauson (we even looked alike), and he endured some teasing, but nothing like what I had experienced elsewhere, or, I daresay, that he would have. We were treated as different but in no way inferior.

I will never forget a band trip I took that year. It was only to Toronto, nothing spectacular. We gave a concert in a public school--and our band were pretty much the only Caucasians in the building. I have always felt like an "other", but for the first time in my life I could see that I was other. It affected me, deeply. I think it affected all of us. Speaking for myself, I was suddenly aware that I was a racist.

You don't really appreciate how racist you are until the script flips and you're suddenly the minority. I was apprehensive verging on scared. Of a bunch of children younger than I. Simply because they were not white like me. And, critically, I could appreciate that they felt the same way every day when they navigated a white world. I won't lie and say I never had another racist thought -- I get them on occasion even today -- but I'm aware when I have one, and I not just to banish it, but understand what gave it voice and banish that too.

I strive to be inclusive because I know what it feels like to be excluded. In the end, that answers all.