Hi, everyone, he says, sheepishly. Long time no see.

Nine weeks isn't that long in the scheme of things, but it's far and away the longest I've gone without blogging since this page went live in May of 2004. I needed the break very badly, and of course cast it as permanent. That was silly of  me. I suspected it then, and know it now. Never is a long, long time.

And it occurred to me that this blog, in addition to centering me and hopefully explaining me, has served as a pressure release valve for when the flamewars elsewhere on the internet get too intense. Rather than draw back, load up my word-cannon, and release a blog, I have been duking it out in the trenches. It's beyond exhausting into deadening, and so I HAVE to find some way to withdraw. But withdrawing completely is beyond me in the same way turning your back on a huge pack of rampaging lions is beyond you. Sooner or later you have to turn around, if only to make sure you're not about to be lunch.

I live in Canada. Regardless of the outcome on Tuesday, I am not about to be lunch. But as much as the current regime has tried to deny it, there is a world outside America's borders, and America has long wielded an outsized influence in it, for good or ill. One of my closest friends escaped from California -- he phrased it that way, like a prison break -- for Leiden in the Netherlands back in July. Europe had already shut its borders to Americans, but Jason is the only man I know who holds triple citizenship: Canadian by birth, American by choice twenty years ago, and Dutch and thus EU by ancestry. His partner is a dual American and British citizen. Jay took a ten percent pay cut and pays significantly higher taxes, but he -- once among my most conservative friends -- appreciates the stuff he gets for what he pays. Like me, and in contradiction of that infamous quote attributed (falsely) to Churchill, he's grown more liberal as he's aged. He's on record recently saying that if every American lived in Canada or Europe for a year or two, the United States would never suffer another Republican government.

And "suffer" is the operant word if Trump succeeds in stealing the election.

Nobody, including him, believes he can win in a fair fight. He doesn't understand why he is so hated, for the same reason us "radical lefties" don't understand why his supporters want us dead.  We have all retreated into our bubbles, and cross-bubble communication is all but impossible.

In the last week, I have run across some Trump voters I would describe as rational, or at least more rational than the rest of them. They've all, to a man and woman, acknowledged that his personality is disgusting, his statesmanship nonexistent, and his behaviour unseemly. But then they talk about what he's done, and here's where the disconnect is almost total.

In their minds, Trump is nothing less than a champion: their last, best hope. He's done things no president in living memory has attempted, and pre-Covid, I read testimonial after testimonial: the heartland, which had been rusting away in an opioid haze of despair, was suddenly experiencing comparative boom times. Factories that were on the verge of shutting were. hiring by the hundreds. To borrow another American phrase, "it's the economy, stupid!"

Trump has only built sixteen miles of new wall, and Mexico has not paid a cent for it. But if you inform one of these Trump supporters of this, they shrug and say two things. One, he tried, which is more than any other president has done, and two, the wall is largely a symbol, a symbol of America First. Which, they take great pains to explain, is NOT a racist sentiment. They do recognize this stance has been co-opted by racists, but in their minds, America First means as close to zero immigration as possible, because immigrants drive down wages. No matter their skin colour.

Tariffs? They used to be the way of the world before borders opened and jobs which paid Americans a living wage evaporated. Trump has tried to bring those jobs back by erecting trade walls. Like most things he's done, he went about it all wrong, and it was doomed to failure anyway because very few countries share his mindset these days. We are all addicted to our C.R.A.P (Cheap, Random, Assorted Product) from China and elsewhere. Never mind that, they say again, he's trying. He's the first President in my lifetime that's actually TRIED to reverse the degradation.

Covid-19 is where it all unravels. If Trump had been most other leaders and sought to protect his people rather than profit from the pestilence, he would coast to victory without even breaking a sweat. As it is, a significant subset of "his people"  are sticking with him regardless. Trump caught the virus and recovered three days later, so how bad can it be? Trump brought the economy back once, he'll do it again.

There are problems with this analysis that go well beyond "the ends justify the means". I am forever astounded by the sheer volume of people who refuse to assign corporations any moral responsibilities whatsoever, and who further blame governments for the actions of corporations. In reality, Trump inherited an economic powerhouse, and his very conception of the economy ("everyone owns stocks") is narrow and elitist.  But perception is reality, and arguing with NOW HIRING is difficult.

It's also hard to argue with the indisputable fact that Trump is the first President since Carter not to embroil America in a new, costly war. He's been all about bringing American soldiers home. This is bad for world stability, but there is a real appetite on both the left and the right for America to give up its role as World Cop. Not to put too fine a point on it, but America can't afford the role anymore. But again and again and again, it's putting your own people first, or at least the perception of doing so. That Trump is all but firing the opening salvo in the Second Civil War is of no matter. "Our people" do NOT include those coastal bastards living in their  sanctimonious sanitariums where everything is an academic study and real lived experience counts for diddly-squat.

And then there's Biden, or rather the demon-Biden these people have been taught to fear and hate. I won't bother refuting the craziness (Trump actually said if Biden won, there would not be reliable electricity in the U.S.!!!) Instead I'd like to concentrate on Biden's theme of unity.

Unity sounds great to us, the world-weary survivors of four years of chaos. To them, it sounds like a death threat in exactly the same way we say "Islam" means "peace" when it really means "submission". Unity, say these Trump supporters, means "sit down and shut up and let your betters run the world the way they're supposed to."

I don't feel like this. I truly believe Trump is a clear and present danger to, well, everything. I believe character matters, and Trump has none. Insofar as I can be said to hate someone I have never met, I hate Donald Trump. If I had a vote, I would cast it for Biden without hesitation, and Biden was not the person I wanted to see come out of the Democratic primary. Harris, either, for that matter: her record on race is a massive liability.

But for all Biden's faults, and there are many, he is at heart a man of compassion, and America needs that DESPERATELY. So does the world. I don't picture Biden trying to profit off the pandemic. I don't see him telling his supporters it's okay to shoot brown people, "but only in the Panhandle". I can't imagine Biden completely ignoring the people around him. Even if I despised Biden as much as I did Hillary Clinton (and I really loathe Hillary, the absolute paragon of establishment entitlement), there needs to be some establishment. By definition. Without that, you've got nothing.

I've been assured that at least most of the Democrat votes will actually be counted. I have my doubts about this, still: so long as you have each state responsible for its elections, you're susceptible to vote-rigging. I don't trust Pennsylvania, in which two of my Biden-supporting friends live, to actually go by the popular vote. Believe it or not, there is a mechanism -- and Trump plans to use it -- to invalidate the popular vote entirely in certain states,  even if it's 100% Democrat. See here for details, if you dare.)

I have been heartened by the turnout. "Vote as if your life depends on it"...and many have. I just hope it's enough. Idealism and cynicism are warring once again in my head. Cynicism has won out too often lately. It's time for some ideals again. Don't you think?

I'm reminded of words that are never far from my mind, in truth. For my American friends, Jack Layton was the leader of Canada's third party, the New Democratic Party. It's never held federal power because we live too close to you and forget it exists most of the time. But AOC and the Squad would feel right at home in it. Layton might well have won the Prime Ministership if he hadn't died. He certainly would have given Justin Trudeau all he could handle.

These words  were written on Jack Layton's deathbed. 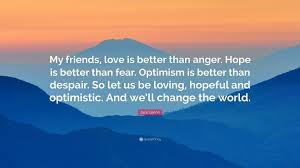 The world could do with some changing. I hope to see it changed, very soon now.

Thank you for reading. I don't know how often I'll be back here. I only know that I will be. And that there will be no more threats to permanently shutter this place. I may need breaks -- hell, I know I will -- but breaks is all they will be until Blogger joins Google Play Music in the Google graveyard.