We'd been looking forward to this little road trek for nearly as long, and nearly as much, as the bigger trek we did in July. Fall colours, baby. Ontario isn't quite as world famous as, say, New England for colour, but I think it should be.

Let me warn you first off that the previous paragraph, while not hyped in any way, will have little supporting evidence in this blog.  Which isn't to say we didn't have a lovely time. You should know by now that we can do that anywhere.

A long while back, I'd bought Ron Brown's BACKROADS OF ONTARIO. It contains 23 excursions, and one of them caught our eye almost immediately, called "Valleys and Cuestas" (a cuesta being a ridge with one gentle and one steep slope). Part of the 90km tour passes through areas we've been to before and know fairly well; much of it was going to be new to us.

Ken should probably read these things a little more closely before he gets all excited and starts us at the end of the tour, the capstone, the Beaver Valley. Kathy and I have been here before, but not in fall.

We found a rest area with no view and the Epping - John Muir Lookout, with a view that maybe lacks autmnal pop, but is nevertheless gorgeous: 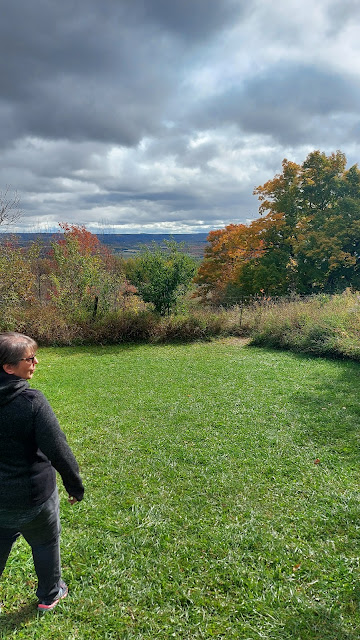 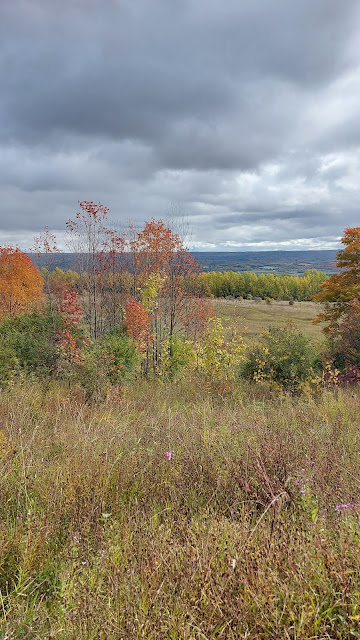 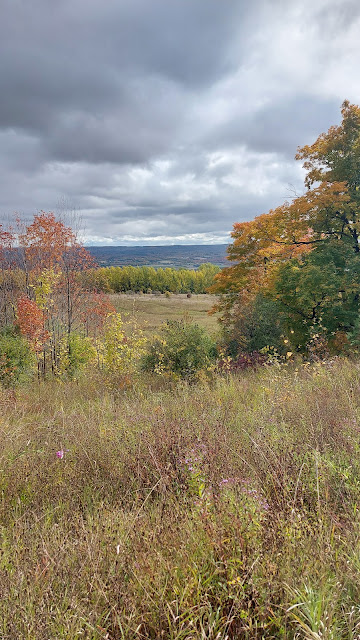 I apologize, sincerely: the best shots of the Beaver Valley would have caused a wreck.

John Muir (1838-1914)  is very famous in conservation circles.  A born wanderer, he spent time in many places on the globe, and played a significant role in the introduction of America's National Parks system. But before that, he lived here in Ontario, near Meaford.
Muir's biographer, Robert Burcher, said that in order to capture Muir's spirit, he had to learn to "go slow, saunter and be present". If that doesn't describe a Kathy and Ken road trek, I'm not sure what does. (Kathy does put her lead foot away on road treks. Honest, she does.)
This is a place that demands a few moments pause. Although you can see modern farm equipment trundling around in a few distant places, you can't  hear it, which suits me just fine and proves, if any further proof was needed, that I belong in a different time, a time before people learned to hate silence.
I feel a sense of solidarity with everyone else who has gazed upon this view. Especially those from long ago, like Muir, who walked most of what we now call the Bruce Trail, communing with Nature the whole way.
We walked along the path to the left of the lookout -- Kathy tells me it extends a fair distance, "longer than you think" -- and something about the forest here felt almost magical to me. 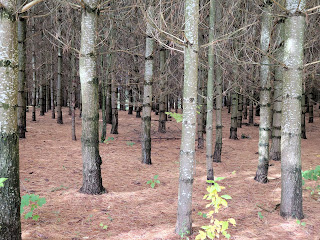 I feel a little silly sharing pictures like this, because -- I mean, here are some trees. I don't know if you can feel what I felt looking at this. I'm not sure I can even put it into words. For me, the forest felt alive, which of course it was and is, but -- on some other levels as well? Like there was a presence here. Calming and soothing, but with a subtle ominous undertone. We live in peace. Why can't you?
The knots in the trees felt like eyes, regarding us. Warmly but sternly, if that makes any sense.
Moving along before you think I've lost my marbles. (Can you be said to lose something you never had in the first place?)
We had some delicious and inflation-busting chicken Caesar wraps, along with veggies and sausage and cheese (oh my) lovingly prepared by Kathy. Then we discovered that if we wanted to complete the tour, we'd have to ditch Gertie the GPS lady and do it old-school.
My, has Google spoiled us and how.
To be fair, Ron Brown's maps in this book are less helpful than they could be. He doesn't even bother to name the roads on the map, in many cases, leaving you scouring the text, cross referencing the map, cross referencing your eyes, and then remembering too late that you started this tour at the end and so all the directions are backwards. We ended up forgoing the planned route from this point on.
Because we were close by,  we went to Thornbury.  We  were here last summer and kind of fell in love with this charming lakeside village. We had hoped to see the salmon running. I'm guessing the posse of fisher-people had caught them all. There had to be thirty cast members scattered along both banks, precariously balancing on stones. Kathy warned me not to get too close in case somebody's cast went awry. Cue Margaret Atwood:
You fit into me
Like a hook into an eye
A fish hook
An open eye 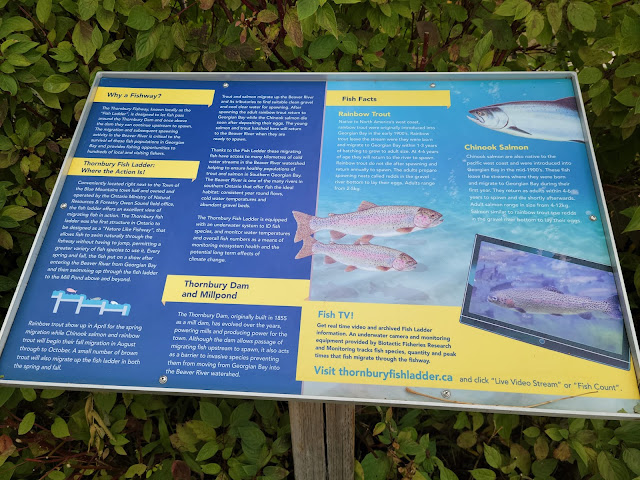 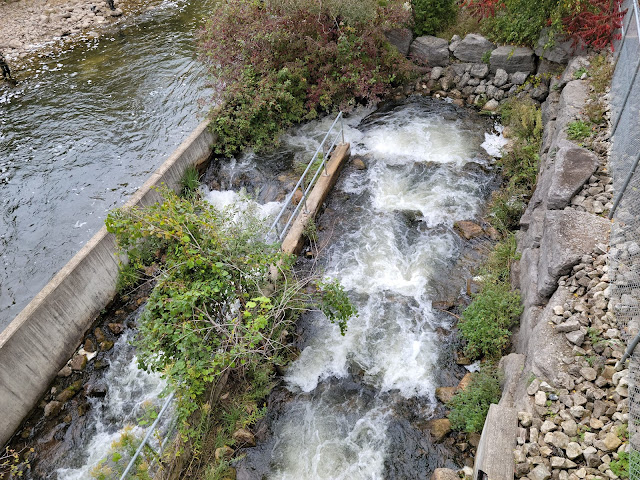 I think we might be back up here in the Spring, when it looks like it's a busier place fishwise. It was a whole hell of a lot busier peoplewise than the last time we were here.
Back to the Bridge of Kindness. Can't get enough of this view. 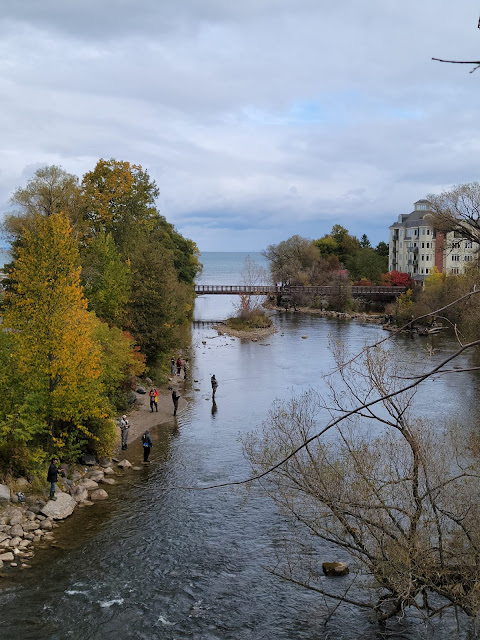 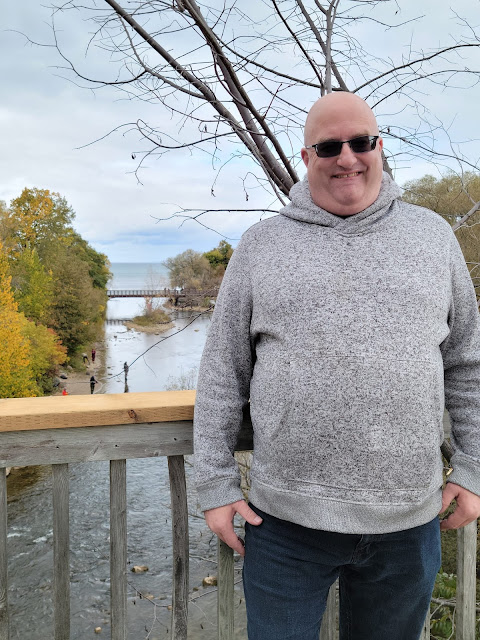 It was COLD here.
I used to be a dairy/frozen guy, and cold never, ever bothered me before. I would routinely spend upwards of an hour in a walk-in freezer, temp -40 plus, or rather minus, windchills, clad in only a T-shirt (okay, smartass, pants and shoes too). Kathy chided and chastised me for refusing to bring a coat along. Stubborn me.  "It's going to be like 9 degrees. A sweater will do me just fine," I said, and Kathy tut-tutted and asked if she could say "I told you so" when I announced how freaking COLD it was.
Hon:
You told me so.
The wind just cuts off the Bay here.
Kathy, dressed for the season: 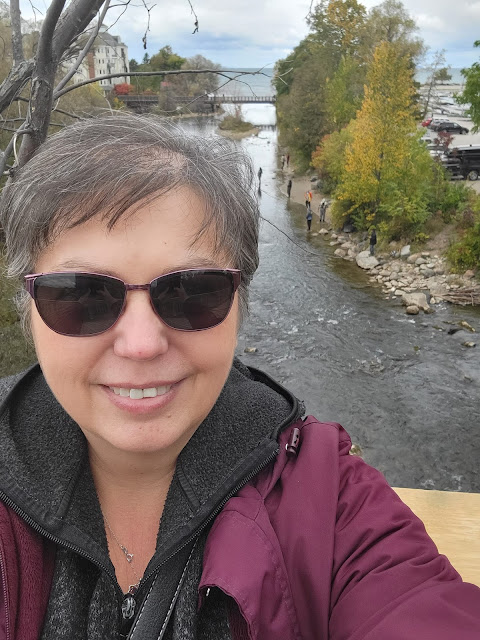 (shiver)
(not cold anymore)
So glad to have gotten the shot from the bridge behind Kathy here, the Bay in all its glory: 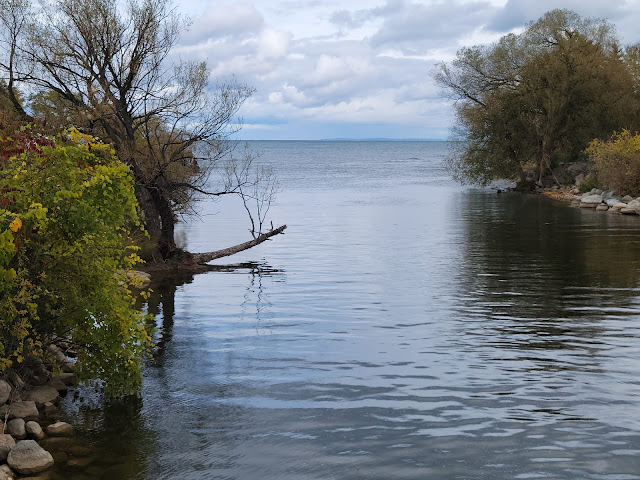 We tried to meet up with the trek we were supposed to be on, but between Ron Brown's less-than-stellar descriptions, my own directional ambivalence, and Gertie the Google GPS lady being drunk as a skunk, we had no luck.
Dad: is it an offence under the Highway Traffic Act if your navigating machine is drunk? Damned thing wanted to take us into the heart of Collingwood. That was NOT where we wanted to go and not where we told her to take us. Eventually we told HER where to go.
It only occurs to me now what the issue was. The next stop on the tour was a little hamlet named Banks. And Gertie, bless her heart, wanted to take us to the nearest bank.
Kathy wanted a turkey dinner, but didn't want to cook one. I can't blame her there: turkey is yummy, but it's a hell of a lot of work. And expense, these days. So we meandered our way to Anna Mae's in Millbank, which has been my favourite place to eat out since I first ate there. Pulled the same schtick that first time I had previously done At The Crossroads (R.I.P.)...when I was paying, they asked me how everything was and I lowered my voice and put on an air of supreme indignation. "I'm really quite angry," I said, and the hostess blanched a little. "I'm sorry, what was wrong and how can we make it right?"
"What's WRONG," I said with feeling, "is that I have been WASTING MY MONEY eating at OTHER restaurants for YEARS." And smiled.
But I meant it At The Crossroads and I for damn sure mean it for Anna Mae's. The prices here remain more than reasonable. Full meal: potato soup, turkey dinner with fixins, and their to-die-for raspberry cheesecake: $20.65. And easily worth half that again.
As you'd expect, it was busy. We were told the wait for a table was 55-65 minutes, and ended up seated at roughly the forty minute mark. I wouldn't wait that long for a table at many other places. But (a) this one's worth the wait and (b) the nearest pale comparison was practically 40 minutes away anyway. Millbank is kind of in the middle of nowhere.
The bakery was even busier, the day before Thanksgiving. I wanted to bring something back for Jade but it was picked clean.
Home again, jiggety jog.
Morning.
There are four places Kathy knew of to break a fast in Woodstock. Three of them she'd been to, with varying results. The fourth, right downtown, is The Barnyard (menu link, no website). Formerly the Olympic, this place is a Woodstock institution Kathy missed only because it used to serve Greek food. Apparently the last remnants of that will be gone with the next iteration of the menu, and the prices will of course go up, but I DEFY you to find a place that will serve you two eggs, homefries and toast for $6.50 anymore. GOOD homefries, too. Prices like this make me seriously wonder how much of the inflation monster is really real. If you can afford to serve decent food at this prices, the places selling the same food at twice the price have some 'splaining to do.
The time came to take me back to Waterloo, but we didn't want to end the day just yet, so we moseyed our way there using a route Kathy had never taken before (which honestly kind of surprised me). Sorry for the lack of photos. "Look at that stand of trees!", we'd exclaim time after time, and now I'm on the Food Network. "Look at all this delicious food, God, you wouldn't believe how it tastes, I'm just smacking my lips here. Oh, you want some? Make it yourself! Bye now!"
I'll stop now. Only two more stops anyway, and I have a PICTURE of one of them: Abraham Erb's Grist Mill, where the city of Waterloo began in 1816. (This is a replica built on site in 1998.) 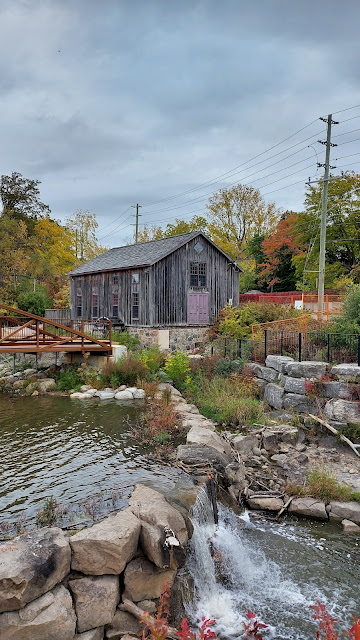 Gotta get running water into these treks somewhere...
Last stop of the day was Holy Shakes. Eva and Mark and I dishskipped from this place about a month ago on a celebratory day, and that experience was memorable enough I wanted Kathy to share it.
It's made (and priced) for celebrations. Extravagant and rich in more than one way: they serve you your message milkshake in a bottle you get to keep. My "Berry Dreams" shake had a slice of (heavenly) strawberry shortcake balanced ON TOP OF IT.
Kathy is vanilla all the way when it comes to shakes and she went way outside her comfort zone to try a KitKat (smile) Cinnamon Toast Crunch milkshake that she said she'd have again sometime.  Honestly, people, this is not your run-after-the-mill standard milkshake place. The creations here are really impressive, and damned tasty.
It's Thanksgiving. I give thanks for this beautiful province, and for the chance to see it. I give thanks for good food, good conversation, and good navigating in the hopes that thanking it in advance might bring it to me.  I give thanks for all the love in my life. And I give thanks to you for reading.
on October 09, 2022